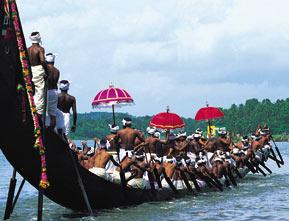 Kerala people are familiar with the name Pampa boat race. It should be noted that as the name indicates Pampa boat race is held on the Pampa river at Neerettupuram in a place called Thiruvalla located in the Kerala state(God's own country), India. The 2011 Pampa boat race will be held on 9 September 2011(Thiruvonam day).

Remember that this is the 55th Pampa boat race. The important feature of this Pampa boat race is that it is considered as the only one of its kind that is usually held on the Thiruvonam day. The event will be inaugurated by D Napoleon (Union Minister of State for Social Justice & Empowerment). The winners will be presented the trophies by Kerala chief minister Oommen Chandy in a valedictory function that will be held in the evening.

Another important point regarding this Pampa boat race is that in the morning the ceremonial flag will be hoisted by Anto Antony MP & Mathew T Thomas MLA will release the souvenir. Since this boat race is conducted on the Thiruvonam day, it will be an important event for all Malayalees of Kerala.