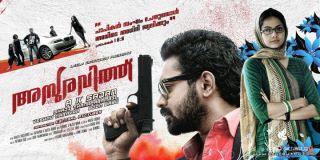 After a break of 5 years, A K Sajan is wearing the director's cap again. His new flick Asuravithu, starring Asif Ali, is to be released on November 9th. A K Sajan, who worked as the scriptwriter for the films Kashmeeram, Butterflies, Chinthamani Kolacase, Red Chillies and Drona 2010, will be directing his 3rd movie. His directorial debut was the Prithviraj starrer 'Stop Violence' which did well in box office and acquired positive reviews from critics. Then he came up with 'Lanka', starring Suresh Gopi, which was a box office and critical disaster. This time, he hopes to make some tides.

Asuravithu is the story of a young man named Don Bosco who had to go through a miserable childhood. Being gentle and religious, he is trying to make a better life. But he is dogged by problems which he struggles to get rid of. He joins Seminary, same time pursuing diploma, aiming to be a priest. But he gets forced to jump out of it after an incident which changes his life entirely.
The role Don Bosco is portrayed by Asif Ali who is lauded for his selection of characters. He feels this role very challenging for him.

The director himself has done the scriptwork for his own story. Cinematography is by Vishnu Nambhoothiri whereas the editing is done by Ranjith. The film was shot at Kochi and its vicinity.