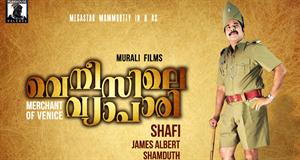 'The Merchant of Venice' is a famous play by William Shakespeare. A Malayalam film with same name is getting ready to hit the theatres soon. It's the film 'Venicile Vyapari' of Shafi-James Albert- Mammootty team. Despite the title, the film has got nothing to do with the play in any means. Here the Venice indicates Alappuzha which is called 'Venice of the East'. It is the team up of Mammootty and Shafi for the fourth time after the super hits Thommanum Makkalum, Mayavi and Chattambinadu. Hit maker Shafi hasn't had a similiar succes of his previous films with recent flicks 'Marykkundoru Kunjadu' and lately released 'Makeup Man'. So he will be hoping for a blast this time. James Albert, who has found his foothold with different and fresh scripts, will be working on his second film with a big M, the first being 'Ividam Swargamanu' which starred Mohanlal. Since the combination seems top class, naturally the expectations are also high.

The film tells the story of a policeman turned coir merchant in Alappuzha named Pavithran (Mammootty). The film is centered on a mysterious murder happened in the 1980s. Pavithran was once a police constable. He was made orphan in his childhood. He enters police force by chance and unwillingly.

Having getting fed up of his job, he resigns the job and starts coir business at Alapuzha. Ammu, played by Kavya Madhavan, is the union leader of the coir workers there. Soon Pavithran developes a love interest of Ammu, but does not reveal his love to her with the lack of courage. At the same time he also befriends with Lakshmi, a bank manager. The character Lakshmi is played by Tamil-Telugu star Poonam Bajwa. Their relationships and the unfolding of the truth of that murder form the rest of the story. Mammootty is appearing in three different get ups in the film including in the uniform of the policeman of the 1980s. As the usual Shafi films, this also will be a comedy flick. Apart from the lead charcters, the film has an ensemble cast of Biju Menon, Vijayaraghavan, Salim Kumar, Suraj Venjaramoodu, Suresh Krishna and Guinness Pakru with others.

The film was shot around Alappuzha what gives the film its name.