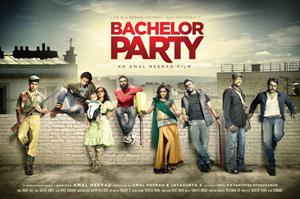 Bachelor Party is the new Malayalam movie directed by Amal Neerad with one of the biggest star cast of youngsters in Malayalam. The film will be Amal Neerads fourth film after Big B, Sagar Alias Jacky and Anwar. Amal Neerad was busy with talks about Arivaal Chuttika Nakshthram which he planned to do with Mammootty in the lead and Prithviraj as anti hero. But date clashes forced him to shift the project back and he decided to go along with Bachelor Party.

The movie will be the first film Asif Ali and Indrajith will be working with Amal Neerad. The film posters which had a touch of freshness is already making rounds in the media now. The photos have become a sensation with the looks that each character has been able to garner. Old monks have done the design of the film posters. The looks of Kalabhavan Mani, Ramya Nambeeshan ,Nitya Menon and Rahman have become viral in Facebook and Youtube.

Release date
The film bachelor party will get released in screens all over Kerala on March 25 2012.