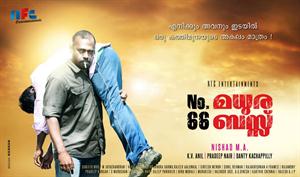 No. 66 Madhura bus is a movie which is fast becoming one of the most discussed movie of 2012. Without any superstar cast that demands attention, the movie is purely being recognized for the relevant and convincing theme the director M.A.Nishad has chosen to visualize on screen.

M.A.Nishad is one director who have chosen to take the harder path and move away from the path of value less commercial success. His movies are something that we value and which have some message for us. The movies like Pakal, Nakaram , Ayudham and Vairam explicitly represent this idea. Each movie had a peculiar theme to it too. And this time he comes up with another peculiar theme that rings bell to us. Something that many directors and story tellers have ignored and something that many of us have seen happening in our day to day life.

The film is all about the families of prisoners. What is their social status? If a man from a family gets rolled up as a prisoner, how does the society treat them? Everyone tries to distance themselves from them and they in a way are ignored. No one would want to relate with them. But what have they done wrong? It is this issue which every one of us neglects that is being told in the form of an entertaining road movie by the director. 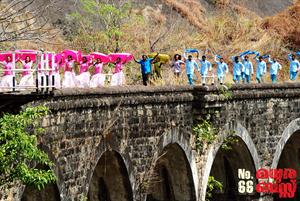 His earlier movie Vairam evoked a lot of response from the masses as the film had a relevant subject added with a stellar negative role portrayed by Jayasuriya. Vairam had Pashupathy in the lead. This time too Pashupathy is back in Malayalam with M.A.Nishad to be varadhan in No.66 Madhura bus. The film also introduces a noted Hindi theatre artist Makarand Deshpande into Malayalam. He plays Sajanayan along with the Pashupathy as the main leads. Apart from them the film also have Jagadheesh, Jagathy Sreekumar, Thilakan, Padmapriya, Swetha Menon, Ashokan, along with a host of other actors.

The film will have Jagathy as the conductor Mathaichan and Ashokan as the driver Shivan Kutty taking into consideration the fact the movie is almost shot related to the bus. Notably the film will have actor Thilakan coming back to the screens. He was appreciated for the role he essayed in his last release Indian rupee proving his authority over and over again in Malayalam cinema. Thilakan will do the role of hunter Varkey in the film.

The film had to face a lot of problems while its shooting particularly when a group of MDMK protesters blocked the shooting of the film at Thenkashi owing to the Mullaperiyar issue. Being a film that explains the story through the journey of a group of people in a bus from Punalur to Madhurai, it was a necessity to shoot in Tamilnadu.

The film has almost finished its production works and will reach the theatres soon. Traffic effected a trend of change in Malayalam cinema from 2011. We are witnessing notable changes with respect to a lot of films where story and the theme takes the centre stage. No.66 Madhura bus would be one that will continue that legacy in Malayalam.

No.66 Madhura Bus is an upcoming Malayalam movie power packed with a heart touching story filled with suspense. Directed by MA Nishad who has been much-admired for being a socially committed movie maker who had shown his obligation towards the society through movies like Pakal,Nakaram, Vairam, and Aayudam. Through the movie No.66 Madhura Bus Nishad tries to tell the tale of incidents happened inside a bus on its way to Madurai from Punalur.

Actress Shwetha Menon is yet again doing a powerful character in Malayalam. In Nishad’s latest Malayalam movie ‘No.66 Madhura Bus’ Swetha is doing a much needed character role which is an essential part in the story. M.A Nishad’s No.66 Madhura Bus boosts of having the presence of a handful of gifted talents uniting for a good movie.

Makarand Deshpande in malayalam through No.66 Madhura Bus movie