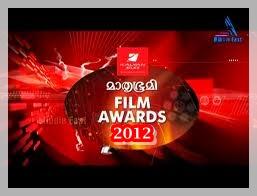 The Mathrubhumi Kalyan Silks Film Awards 2012 has been announced. Mohanlal won the best actor award and Kavya Madhavan won the best actress award. Mohanlal has been selected as the best actor for his outstanding performance in 'Pranayam'. Kavya Madhavan once again bagged the 'Best Actress Award' for her outstanding performance in the movie, 'Gaddama'. Renjith selected as the best director award for his film 'Indian Rupee'. 'Pranayam' directed by Blessy won the best film award. Thilakan won the Best Character Actor award in his best performance in the movie,'Indian Rupee' and Jayaprada won the Best Character Actress award in her best performance in the movie,'Pranayam'. All the winners were selected on the basis of voting done by the viewers through coupons published in mathrubhumi through club FM SMS and through mathrubhumi web portal. The award presentation ceremony will be conducted on 3rd March at Marine Drive, Cochin.