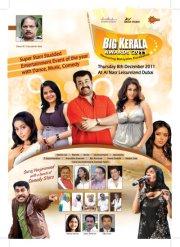 The 2011 edition of Big Kerala Award ceremony was held at Al Nasr Leisure Land, Dubai to honor the top personalities in regard to their inspiration works in various fields. The event was a dazzling night attended by the popular movie artists from Malayalam movie industry The award function has a huge attendance as thousands of spectators gathered at Al Nasr Leisure Land, Dubai to make the show a success.

The Award night was accompanied by a mega show featuring the performance of top most artists representing malayalam movies and music. Cinematic performance from popular artists, comedy skit, music and much more made the night a memorable event.

This extravaganza is brought by Delta Vision joining hands with Lovebirds Entertainments which is supported by Surya TV. This Award show will honour the 10 big Icons in Kerala who have succeeded in various fields. This mega show had the presence of popular writer M T Vasudevan Nair, super star Mohanlal. Live performance of celebrities, dancers and comedians really enthralled the audience.

The awards given out to the icons, those who have made their name in various grounds through inspirational works do boost their performance to go up in the next stage. This gives real motivation to the young talents who are looking forward for success.

Surya TV, the leading entertainment channel in Kerala is telecasting the Big Kerala 2011 Award Nite on 26th February 2012 from 10 AM onwards. The Award Nite will show case the magnetic performance of young artists performing before the full packed audience.

Deal or No Deal in Surya TV - A variety reality show