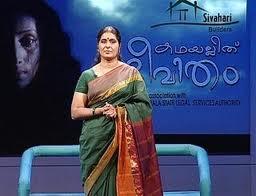 In the midst of reality shows and other entertainment programmes, Kathayallithu Jeevitham telecasted in Amrita TV stands apart in the theme, over all presentation and genuinely due to the commitment in solving problems of the families. It is for the first time in malayalam television channel moving slightly from the crowd of entertainment, a programme fully dedicated to fulfill the social commitment towards the society. Amrita TV's 'Kathayalla, Ithu Jeevitham' looks similar to a court room where disputes related to real life is being discussed, mediated and further settled satisfying the interest of both the families. Each case which runs from a period of one week seems to feel like seeing an emotional movie just live in front of the television.

Anchored by popular actress Vidhu Bala, the show is supported by a panel of judges consisting of well-known advocates, renowned psychologists and devoted social workers adding more power to each episode. 'Kathayalla, Ithu Jeevitham' brings shattered families to a common platform. Having an open discussion on each aspect of a variety of issues related to the conflict, the team behind the show acts as a mediator and tries to solve the problem is a meaningful manner.

In the initial stage, the case is opened and the two parties are allowed to give a brief making their stand clear. In the latest episode, family members, friends and neighbours will join the discussion. The expert panel consisting of experts would make their comments. In the final stage after long round of mediation and negotiation the will end up in a conclusion if interested parties do sign an agreement to abide according to the words put up in the show.

Amrita channel has fully dedicated a page in their official website dealing to deal with 'Kathayalla, Ithu Jeevitham'. Here viewers can go through various cases and the historical back ground of the issue in detail. More than that, videos of all former episodes are arranged in order according to which it had been telecasted on television. Watch the previous episodes here.

The search for the list of onam movies 2011 in amritha tv has ended as the channel has announced the list of malayalam movies to be broadcast during the 2011 onam week. Expect few fresh movies which are slated to entertain the kerala audiance. Read more to get the list of movies in amritha for this onam season