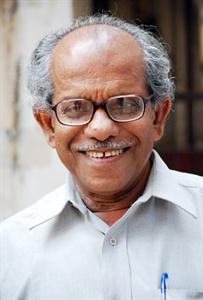 CPI state secretary is CK Chandrappan who has died here on Thursday. He has recently admitted in the hospital of KIMS hospital on Monday but all medicines are not work. He was under treatment for cancer.

The main reason for C. K. Chandrappan's death was cancer affect in his chest. The age of Chandrappan is Seventy-six year old. So far he had been suffering from cancer for nearly a year now. He has recently died at a private hospital in Thiruvananthapuram. One week before, Chandrappan had been admitted to a hospital at Kochi. He was shifted to another hospital at Thiruvananthapuram when his body condition went complicated. Finally he was moved to ventilator at last night and his breath lost away at 12.10 p.m.

After his death his body moved to the M. N. Smarakom which is the state of headquarters of the CPI, from 4 p.m. to 7 p.m. Next his body shift to another place according to the public viewing. Again his body moved to Alappuzha for cremation which happened on Friday. The official programmes are terminated by CPI which made by CPI leader.

C. K. Chandrappan was a CPI Kerala state secretary. He was born in 10 November 1935 and he has died on 22nd March 2012. He was a famous and effective politician from Kerala, India. He was one of the best and good Kerala state secretaries of the Communist Party of India (CPI). He was a president of Kisan Sabha when he has died in Kerala. He was one of the members of the Lok Sabha of India . Chandrappan has worked as a great Member of the Legislative Assembly of Kerala from 1991 to 1996 which has Chertala Assembly Constituency. Chandrappan passed his schooling at Cherthala and Thriupunthura. He finished his degree in the college of Chittur Government College and also he completed his post graduation at University College in Thiruvnanthapuram.

C. K. Chandrappan's father C.K. Kumara Panikker was one of the best leaders of CPI and his nick name is Vayalar Stalin. The Panikker was a great fighter and leader in the palce of Punnapra-Vayalar uprising.

Chadrappan started his political life when he was a student. He became a great member of much organization such as of leftist youth federations. He was member in leftist youth federations in the year of 1970s. He was also worked as president of All India Youth Federation (AIYF). He was contributed in some conference and many other activities such as Goa liberation movement. And due to his political activities he was went to jail. He was jailed in the following places such as Delhi, Kolkata and Thiruvananthapuram. The Chandrappan wife name is Bulu Roy Chodhary who was contributed in many political activists from West Bengal. He was one of the top performers by the National Social Watch, an NGO.