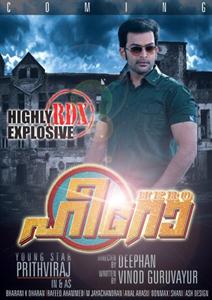 After the superhit movie Puthiya Mukham, director Diphan and Mollywood's young superstar Prithviraj are pairing up for the next flick. The shooting of the new movie, named Hero, is almost completed. This is the 2nd film of the duo. Hopes are high for Hero because Puthiya Mukham, released in 2009, in fact gave Prithvi a new face as the name denotes. Prithvi wasn't having a great time then and Puthiya Mukham gave him a needed break. His latest movie Masters, with Sasikumar, is garnering good reports.

Hero belongs to the same genre of Puthiya Mukham, an action thriller. Prithviraj is playing a different character in the movie as a stuntmaster named Tarzan Antony. Both his professional and personal lives are presented in the movie. Popular Telugu model and tv actress Yami Gautham play the female lead. Tamil Actors Srikanth, Talivasal Vijay and Bala also play very important characters in this film. Anoop Menon, Anil Murali, Indrans and Malavika handle other important roles. Prithvi will be doing perhaps his toughest fight scenes ever in Hero.

The script of Hero is written by Vinod Guruvayoor. Cinematography is by Bharani K Dharan and Editing is by Samjith.

Shibu Chakravarthy and Anil Panachooran have written the lyrics of the film. Gopisundar is the music director of the movie. Kanal Kannan is the stunt choreographer of this action packed film. Hero is produced by Vijayakumar under Seven Arts International Banner. The film is set to be released next month.