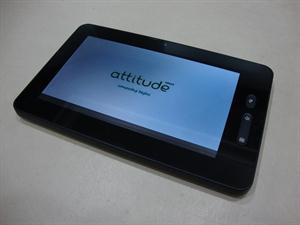 After the internet world had gone for a high buzz for Aakash Tablet, BSNL Tablet, Micromax Funbook, here comes yet another cheap tablet from Kerala, God's own country. Telmoco Development Labs, a company that is based up in Kerala has launched a tablet named as 'Attitude Daksha' which is going to make a revolution in the tablet market in India. 'Attitude Daksha', being a cheap tablet will be priced at Rs, 5,399 making it one of the cheapest tablets to be available in the Indian market. Even though the price of Attitude Daksha will be little big high in price compared to the much hyped 'Aakash Tablet', it is known that it would be the cheapest tablet to be available powered by the latest version of Andriod OS; Android 4.0 Ice Cream Sandwich.

The 7 inch Attitude Daksha is suitable for students and professionals who like to have a tablet while on the move. The entry of Attitude Dakhsa will add more fire to the ongoing battle of cheap tablets. It is known that the 'Attitude Dakhsa' is powered by a 1.2 Ghz ARM Cortex A8 CPU with 512 MB DDR3 memory. The tablet is capable of playing videos at 1080p and will run flash apps.

As per information, the tablets will be launched at schools, professional institutions and corporate houses. The Attitude Dakhsa tablet will be open to public for online order from 15th May from http://www.telmoco.com/, the official website of telmoco.

For the last few weeks, the Micromax Funbook was making the buzz, but now with the arrival of Attitude Dakhsa, tablet lovers will have more choices. Just after the launch, the Microsoft Funbook had been making news being the cheapest tablet sold like hotcakes. But from May 2012, Funbook would have to face a tough competition from Daksha Tab in few weeks which comes with better battery life.
The arrival of Dakhsa tablet will be like a rain in the desert for millions of tablet lovers who had been waiting for their baby tablet Aakash for quite few months. Even though millions have paid money online for Aakash tablet, still none have got their dream tablet in hands. So why can't you try for Attitude Daksha?

Attitude Daksha tablet up for preorder online at Telmoco website

Do you know how to pre order Attitude Daksha tablet online from Telmoco website? Attitude Daksha is being launched by Telmoco Development Labs, a Kerala based company which focus on Telecom, Mobility and Advanced Computing technology. The tablet which is priced at Rs 5,399 is comes power packed with the latest version of Andriod OS; Ice Cream Sandwich. With the arrival of Attitude Daksha, the tablet market in India would witness a fierce battle remembering a proverb ‘survival of the fittest’.