Arackaparambil Kurien Antony was born on December 28, 1940 and is an politician by Indian and is now the member of the parliament of Rajya Sabha and Defence minister of India. He served as the Chief Minister of Kerala. He is also a member of All India Congress Committee and he is the chairman of Disciplinary Action Committee. He is the member of the Central election committee and Congress working committee. He is the senior member of Cabinet committee of Accomodation, Economic, Affairs, Political Affairs and security. 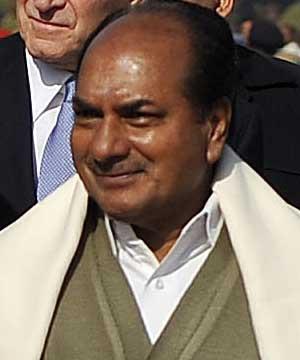 A.K Antony entered into politics as student leader in Cherthala area in Alleppey District. He is really an activist of Kerala students union and he was guided by M.A John. He was leader in many strikes like Single penny strike and he became the young president of KSU in 1966. He has also given commitment in Kerala Pradesh Committee and he became the general secretary of All India congress committee in 1984. In 1972 he was the youngest person to hold the KPCC president and he was elected again as the president in 1987. In 1991, presidential elections of KPCC he was defeated by the Vayalar Ravi.

The congress party was founded by Antony and he come out from the Indian national congress. He opposed Indira Gandhi in party politics, when she was prosecuted by Morarji Desai government. The party was very active in kerala and they joined the LDF ministry which was lead by E.K Nayanar in the year 1980-1982. When Nayanar ministry was defeated they merged with the congress in 1982, but Antony was not given any office till the death of Indira Gandhi. In the Rajan Case K. Karunakaran lost his position and Antony became the 8th chief minister of kerala. He was the youngest chief minister at the age of 37 from the April 27, 1977 to October 27, 1978. In the ISRO case Karunakaran lost his position and Antony again became the 16th chief minister of kerala from the year March 22, 1995 to May 9, 1996. He was opposition leader in Legislative assembly of kerala. Antony was again elected for the third term from May 17, 2001 to August 29, 2004. Then he failed to get the positions as chief minister and facing defeat in Lok sabha elections Antony lost the chief minister position and it was occupied by Oommen Chandy.

Antony was the member of the parliament in Rajya Sabha from the year 1985 to 1995 and he was the minister of civil supplies, consumer affairs and public distribution. It was during the period of prime minister P.V Narasimha Rao. In 1994 he lost his position as food minister and it was due to scandal related to sugar import. There was no allegation against him in that case. A.K Antony began his journey in Rajya Sabha in 2005 year and he was selected into council of union ministers and he was appointed as Defence minister and Pranab Mukherjee was transferred into Ministry of external affairs. In 2009 congress again won the elections and they formed government under Prime minister Manmohan Singh. A.K Antony was person who is having longest service and he was successfully elected second time as Defence minister.

A.K Antony married Elizabeth who is from Syrian Orthodox family and they are having two sons. Anil Kurien Antony is a graduate from Stanford university and Ajith Paul a graduate from St. Stephen's College, Delhi. He is devotee of Mata Amritanandamayi and told that he has seen stars when she hugged him. A.K Antony is known for his good service and he is not a corrupted person and he is one of top 10 powerful Indians in the year 2012 and it was rated by Indian Express.

• In the year 2008 he has won Malayali of the year and it was awarded by Asianet.