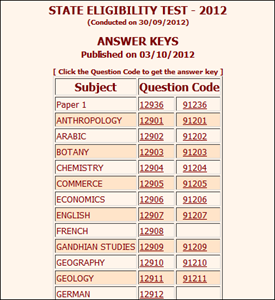 The LBS Centre of Science and Technology who were in responsible of conducting the Kerala SET Exam 2012 has published the answer keys of various subjects in the official website. The exam was conducted on 28th September 2012 at various centres in Kerala attended by thousands of young aspirants who seeks job in government higher secondary schools in the state. The 2012 State Eligibility Test (SET) was conducted for the following subjects.

For the convenience of the candidates who had appeared for the exam, the LBS have published the answer key which will help them to check their progress before the official results are published. The results of 2012 SET exam are expected to publish on 5th November 2012.

How to get Kerala SET Exam 2012 answer key

Candidates who had appeared for the 2012 Kerala SET exam can check the answer keys of each subject from http://www.lbskerala.com/ the official website of LBS or you can get the results from the following link.

Just follow the link in the web browser to down load the answer keys. Answer keys of each subject is given separately.