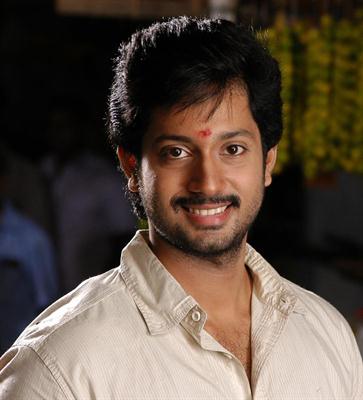 The young chap Rejith Menon is shuttling from location to location due to his tight schedule. After securing a mechanical engineering degree, Rejith is slowly getting busy with a handful of projects in kitty. Even though the actor has appeared only in less than 10 movies, the time was much enough for him to create a space in the heart of millions as a passionate actor.

If it was director Kamal who introduced him to the world of entertainment, known film maker Vikraman much confident about Rejith's acting skill is launching him before the tamil audience through 'Ninaithathu Yaaro'. The 17th movie from the director, 'Ninaithathu Yaaro' is expected to enhance the career graph of the actor.

Rejith who plays the role of an assistant director in the movie speaks a lot about his Tamil debut. Really on cloud nine, Rejith shares his excitement with SpiderKerala, "Ninaithathu Yaaro" is the 17th movie of Vikraman Sir and I am happy to be chosen as the lead character. This unique love story is about how love can help you to cross dreadful situations and be a winner in life." Rejith said. As Vikraman has proved to be the backbone for bringing the best out of made them leading actors, Rejith too hope that her could recreate the magic in his career also.

More interestingly Nimisha Suresh too feels lucky to make her debut in tamil. Acted in few movies including Pachakuthira, Mayavi, Doctor Love etc, Nimisha too feel "Ninaithathu Yaaro" as a stepping stone in her acting career. Meanwhile Rejith cannot stay away from malayalam movie industry with a couple of projects going ahead.

The actor who has already worked with legendary directors including Kamal, I V Sasi, Joshiy, Rajasenan and T K Rajeev Kumar, keeps high ambition about his upcoming projects in malayalam. Rejith would appear as Binoy with a never seen getup in Ranjan Promod's Rose Guitarinal.

His debut venture 'Goal' had a refreshing theme as the actor got noticed with his young charming look and talk. Only very less film makers have tried to unwrap the potential of this actor. His performance in Doctor Love, Sevens and Innanu Aa Kalyanam and Chapters were much appreciable.

Rejith who looks gorgeous in any clothing will also be featured in T.K Rajeev Kumar's 'Up & Down: Mukalil Oral Undu'. His next 'Tourist Home', with no cuts and pack ups which has been wrapped in a single shot will reach theaters soon. His days in St. Joseph's College, Chennai for graduation turns lucky for the actor as the hero of "Ninaithathu Yaaro" had to speak Tamil fluently.

Vijay's Thuppakki releases on this Diwali in Kerala

Thuppakki is releasing on 111 theaters in Kerala on the blessed day of Diwali. Fans are expecting another big one from Murugadoss and Vijay. Producer has cashed 75 crores for this movie and hope it will entertain at it's best. Read this article to know more about the release in Kerala.

Vijay’s ‘Thuppakki’ being the most anticipated tamil movie in 2012, will have a number of release centres in Kerala which is much needed to satisfy the huge mass fans of the actor who are counting days for the grand reception of the movie. Unlike malayalam movies, tamil films are creating success in the state as much of them divulge visual magic on silver screen too woo the movie lovers. The Kerala right of Thuppaki was bagged by Thammens for a whooping price which is still under hush.

Mohanlal and Vijay together in a tamil movie?

Do you wish to watch Mohanlal and Vijay together in a tamil movie? If you do admire Mohanlal or Vijay, this would be great news. Heard from the grapevine a leading daily reported that Malayalam superstar Mohanlal and Ilayathalapathy Vijay will be seen in a tamil movie while initial discussions have taken place. If the news is to be believed, it would be the best chance for the millions of fans of both actors to get hooked to it.