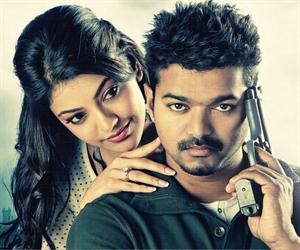 Glad news for the Vijay fans in Kerala! The upcoming stunning Vijay film Thuppaki will release on the day of Diwali, that is on 13th November. This created a celebration mood among the fans and they are waiting impatiently. The release of the movie was in a doubt because of the theatre strike in Kerala but finally the theatre owners withdrawn their strike and presently there is a good rush in releasing movies. Official centres inform that Thuppakki will hit in 111 theatres in Kerala on November 13. Later, it was decided to release on November 9th but the strike in Kerala made the production team to extend the release date as there will get huge collection for Vijay films.

Release of the movie in Andha Pradesh is also extended and will be on the same date November 13th. This is bacause of the big competitors, Nagarjuna's Damarukam and Rana Daggubati's Krishnam Vande Jagadgurum. After Ghajini and Ezham Arivu, director A. R. Murugadoss is going to give a Diwali treat for the entire Vijay fans! The story of the movie rolls around the Mumbai underworld and the songs of the movie are already become super hits. Kajal Agarwal is the pair of Vijay, and Jayaram is also doing a main role in the movie.

By looking at the cast of the movie, Vijay is doing the role of Jagadish, who is an underworld king. Kajal Agarwal is the heroine and it was confirmed after considering several Bollywood actresses include Deepika Padukone, Sonam Kapoor and Priyanka Chopra. Akshara Gowda is doing the role of the second heroine and Malayalam actor Jayaram will do an important role also.

The film has defended some controversies because of the illegal posters. According to the latest rule announced by Govt of India, no smoking scenes are allowed in the movies. In one of the Thuppaki's posters, Vijay is having a cigarette in his hand. Director has reported the Government that it was only for promotion and the film has no smoking scenes. Another problem was with the movie name logo because this logo was already used in an old Tamil movie named Kalla Thuppakki. This case has been withdrawn on October 5 itself by the assistant director of that old movie Kalla Thuppakki.

Kalaipuli S. Dhanu produces Thuppakki under the banner of Kalaipuli International with a big budget of 75 crores. Thameen's Films and Shri Senthil Pictures are the distributors of the film in Kerala. The total distribution rights own by Gemin Film Circuit. The Telugu dubbing rights of the movie has been sold out for 15 crores which is the second highest right value after Dashavatharam. And Vijay TV owns the television rights which is also sold at record prices.

In brief, Thuppaki has already collected more than half of the production cost! The most popular music director, Harris Jayaraj is the composer of the movie for the lyrics penned by Muthukumar, Vivega and Madhan Karky. There are 7 beautiful tracks in the film include a theme song which is an instrumental track specially done for promotion. The movie Thuppakki has made a YouTube record by getting 4 lakhs+ hits for the teaser in a single day. This created a wave in the film world and it helped the movie in promotion as YouTube is one of the biggest platforms for promoting a movie.

Ghajini was one of the all time huge hits but this director's last movie Ezham Arivu did not come to the expectations. Anyways Vijay fans are in a celebration mood and are ready to rock it. Last Diwali was rocked with Vijay's Velayudham and therefore the fans are expecting another stunning movie from Vijay!

Rejith Menon would be in cloud nine after making his appearance in 'Ninaithathu Yaaro', an upcoming tamil movie directed by Vikraman. Rejith would pair with another malayali Nimisha Suresh who is also set for her acting debut in tamil. Director Vikraman who had delivered several hits in the past is looking forward with his 17th movie which is to a true love story.

Vijay’s ‘Thuppakki’ being the most anticipated tamil movie in 2012, will have a number of release centres in Kerala which is much needed to satisfy the huge mass fans of the actor who are counting days for the grand reception of the movie. Unlike malayalam movies, tamil films are creating success in the state as much of them divulge visual magic on silver screen too woo the movie lovers. The Kerala right of Thuppaki was bagged by Thammens for a whooping price which is still under hush.

Read Thuppakki, tamil movie review and FDFS reports from theatres in Kerala. Much anticipated Vijay's Thuppakki which set for a world wide release, making an entry into more than 1500 theatres including more than 120 theatres in Kerala. Vijay who is having millions of fans around the globe also have a long line of admirers in Kerala too. After making his campaign with Nanban early in 2012, the actor is back in action with Thuppakki to enthrall the viewers.

Mohanlal and Vijay together in a tamil movie?

Do you wish to watch Mohanlal and Vijay together in a tamil movie? If you do admire Mohanlal or Vijay, this would be great news. Heard from the grapevine a leading daily reported that Malayalam superstar Mohanlal and Ilayathalapathy Vijay will be seen in a tamil movie while initial discussions have taken place. If the news is to be believed, it would be the best chance for the millions of fans of both actors to get hooked to it.