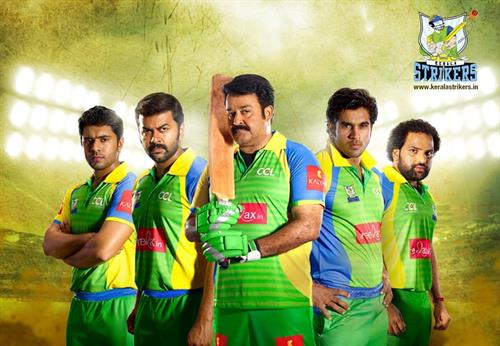 With the next edition of Celebrity Cricket League getting near, actors representing various film industries have started their own practice sessions. Rajeev Pillai, a member and prominent presence in Kerala Strikers is on the way finding time to practice between the tight schedules of his acting career. With the team is not yet formed, adequate changes would happen in its structure.

According to information from available sources, the 2014 edition of the CCL will begin on 25th January 2014 at Kochi. Kerala Strikers who made spectacular games in the previous matches will be having a fresh team along with few players who had shown their mettle in the field. Bhavana and Mythili will be the brand ambassadors for 2014 while some changes might occur in the team manager category.

Kerala Strikers would play their first game on 26th January against the Bengal Tigers. The Kerala team will be having their next game to be scheduled against the Veer Marathi to be held at Dubai. The match against debutante Telengana will be played at Ranchi.

The Celebrity Cricket League which started in 2011 was widely supported by the celebrity world which later became popular among the television viewers. The last edition of CCL was a success with 8 teams participating in the tournament.

Kerala Strikers under the captaincy of Mohanlal would be giving much importance for the practice sessions. The team owned by Lissi Priyadarshan is looking forward for the upcoming season with a fresh team to compete with others.