Bhagyanthan C G who is known as a writer and designer is all set to entertain the malayali audience with his maiden project. Tilted 'Shesham Katha Bhagam', the movie is themed around a village and Aranikulam which was considered to being prosperity to the village. 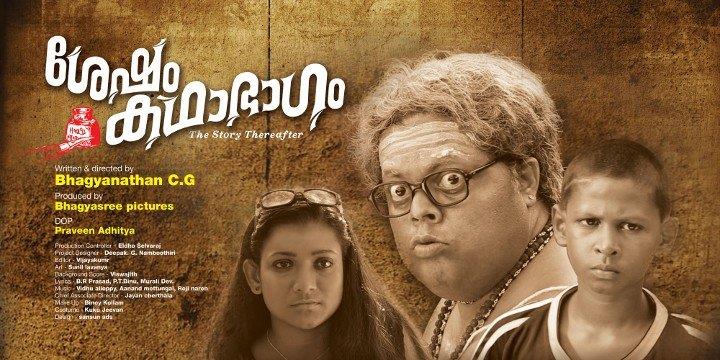 Aranikulam situated in the village is considered to bring happiness and wealth to the people living there. Kazhakam who is a part of the village finds Aranikulam as a part of his life. The villagers also considered it with reverence and could not think living without Aranikulam. During the happy days, few people came up with a plan to acquire 20 acres of land and build a high-tech city. The land which was proposed to alter included the soil of Aranikulam.

Sajad, a, ordinary person, along with Kazhakam and the mentor of the village truly fought against this act. But their voice didn't get much support as the court discarded their plea. The judgment went against their thoughts which supported the proposal to alter the land. As the Aranikulam was proposed to get buried, children of the village and Appu, the son of Tipper Vasu joined them to fight against injustice.

The project got started with an inaugural function attended by the engineers, workers and contractors. Kathrina, daughter of the engineer was also present during the occasion. Being a good orator, she won many prizes delivering the speech of Martin Luther King. While staying in the village, she joined the children to enjoy its natural beauty. As she went into the inner half, she comes to know about Aranikulam, which was regarded as the soul of the village.

Kazhakam had to give up his life while protecting the Aranikulam. As waited, it was the entry of Tipper Vasu who came up with the first load of soil. As his son Appu stayed on the way, not permitting Vasu to move forward. Heart breaking events which happen later forms the crux of the movie. M G Sasi, Anoop Chandran and Anjana will be seen in lead roles. Mohan Ayiroor, Ashok Raj, Shaji Palamel, Chethan Babu, Hari Kudavettor, Kalabhavan Jinto, Kalabhavan Nasar, and Sneha will also give life to other prominent characters. The camera is helmed by Praveen Adithya.

For the lyrics of Biyar Prasad, P T Binu and Murali Dev, the tunes are set by Vidhu Alleppey, Anand Mettunkal and Reji Naren. Shot at Karimukul, Puthen Kurishu which stayed as the major locations, 'Shesham Katha Bhagam' would reach theatres very soon.