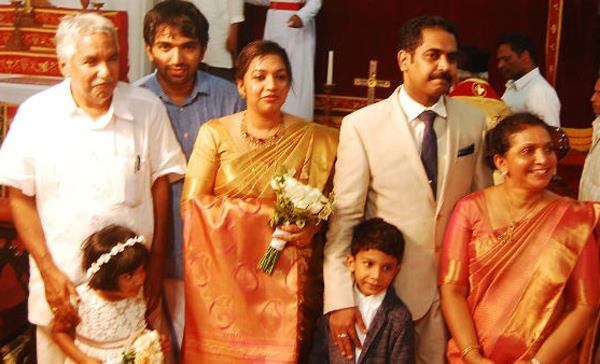 The marriage was held at Palayam Orthodox Church which was attended by only close relatives and friends. A reception was also given to the invites at the cliff house.

As like his political career, Oommen Chandy does give prime importance to his family life too. Being a caring father to his daughters and son, he is loved and respected by all in the family. Even during his busy schedule with political matters, he finds time to spend with his family. Sri Oommen Chandy's family includes his wife Smt. Mariamma Oommen, a son Chandy Oommen and Daughters Maria and Achu.

Meanwhile Sri Oommen Chandy who was supposed to attend the swearing-in ceremony of Narendra Modi as Prime Minister will not be a part of it due to some engagements in Kerala. But various other political leaders representing their party from the state would attend the function which is being held at New Delhi. Tight security has been arranged in view of the swearing-in ceremony which will be attended by foreign leaders.

More than 10,000 personnel are being deployed to secure the Rashtrapati Bhavan while security arrangements have been made in the hotels where top dignitaries are staying.