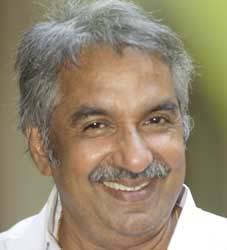 Oommen Chandy is a politician of Kerala state in India and a member of the Indian National Congress (INC). He has been representing the Puthuppally constituency of Travancore district since past few decades. Currently, he is the leader of the opposition party in Kerala. He was the 19th Chief Minister of Kerala and was in power from 2004 to 2006. Oommen Chandy is also a trade unionist and is the leader of many INTUC unions. He has been elected as the chief minister of Kerala four times. It was under Chandy's leadership that the UDF (United Democractic Front) achieved many victories in Lok Sabha Election 2009 and Local Body Election 2010. This marked as the first time that UDF got a position of control in the local elections. He is fondly known as Kunjooju by his loyal followers.

Oommen Chandy's father's name is K.O Chandy and mother's name is Baby Chandy. He hails from a Jewish-Orthodox family. He became active in politics from his school days where he was an activist of Kerala Students Union (KSU). While studying at St George High School, Chandy was the unit president of KSU and further became the State President of KSU. He completed his college graduation from CMS College, Kottayam and SB College, Changanassery. He also has a Bachelors degree in Law (LLB) from Government Law College, Ernakulam. The people of Kerala maintain a high regard of Oommen Chandy because of his simplicity, helpful behaviour and clean track record. His wife's name is Smt Mariamma Oommen who is a retired Canara bank officer. The couple has three children, two daughters Maria and Achu and one son Chandy Oommen. Even through his busy schedule of shouldering the whole state's responsibility, he still manages to spend quality time with his family.