The Kerala Public Service Commission would soon be publishing notifications of 53 posts for the exams which are slated to be held in August. The upcoming notifications include vacancies in Agriculture department (36 vacancies), Civil Supplies Assistant Pharmist, Bender Grade II in various departments, Sub Inspector of Police – General Executive Branch, Excise Inspector etc. 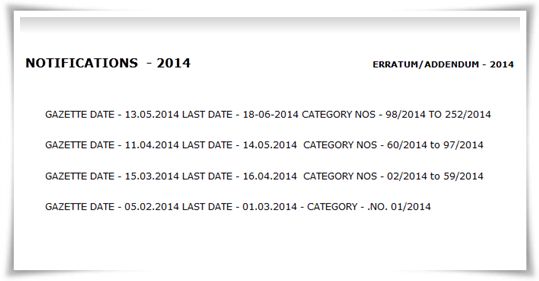 Regarding the education qualification of Sub Inspector of Police recruitment, the candidates should have attained a degree from any recognized university. Those who have graduation or post graduation in Social work/ Social service will be given weightage while considering them for the post. The last date of submitting application is limited to 15th July. An objective type exam would be conducted on 2nd August 2014.

As the Kerala Public Service Commission plans to publish the rank list within one year, there may not be a main exam following the preliminary test. The short list is planned to publish in November 2014. The physical tests would be conducted during December – January – February. Those who pass the physical exams will be called for interview. After the ultimate valuation, the final rank list would get published by June 2015. The last notification regarding the posts of Sub Inspector Executive General was published on 28th September 2007.

As all the exams need well preparation, candidates who wish to apply for various posts with the Kerala PSC should have a prior knowledge about the syllabus and marking pattern. Earlier the Kerala Public Service Commission has announced the notification of 55 posts with category Numbers extending from 98/2014 to 252/2014. The last date for applying for various posts is marked as 18th June. As the recruitment notifications of August 2014 will be published by the third week of June at the official website, applicants must keep a close eye on the Kerala PSC website to know the announcement status.