The Kerala Public Service Commission has made all arrangements to conduct the Sub Inspector of Police Trainee (General Executive Branch) exam 2014. The tentative schedule of Inspector of Police (Category No: 253/2014 to 256/2014) examinations has also been announced.

According to the notification from the PSC, the OMR test will be conducted on 2nd August 2014 while the physical efficiency test would take place between December 2014 and February 2015. Candidates who wish to apply for the post should register as per 'One Time Registration' system on the Official Website of Kerala Public Service Commission 'www.keralapsc.gov.in' before 16th July 2014.

As entering the police force is the dream of many youngsters, it is very important to have a systematic preparation much before the examination. As both physical and mental are being tested, candidates should start working on it right away. The preliminarily test consists of an objective type exam (OMR Valuation) based on the qualification prescribed for the post. 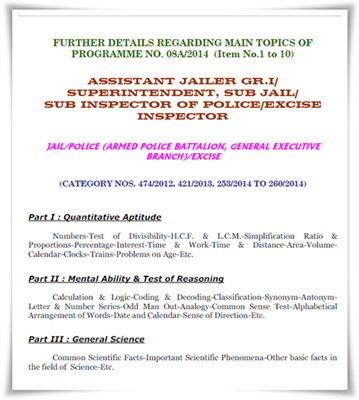 As the exam is just near, an instant learning is needed from the part of the candidates who keep a burning desire to enter the Police service. A well knowledge about the portions indicated in the syllabus is well needed. Questions related to Renaissance in Kerala will also be a part of the syllabus. Much before the examination, candidates should take as many Mock Tests as possible.

After the preliminary test, the the short list of selected candidates will be published in November 2014. During the months of December – January – February the physical tests for selected candidates would be conducted as per schedule. Those who pass the physical exams will be invited for the interview. After the decisive valuation, the final rank list will be prepared and published in the website by June 2015.