The Kerala Engineering Agricultural Medical (KEAM) engineering and architecture rank lists are expected to get published on 15th June 2014. The rank lists are well being prepared on the basis of submitted relevant mark submission data and attested copies of Plus Two mark sheets by the students who qualified in the entrance exam. As soon as the results get declared, it can be obtained at the Office of the Commissioner for Entrance Examinations and on the official website. 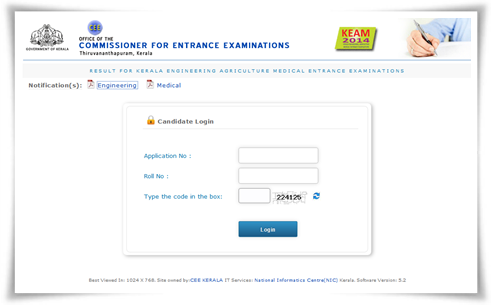 Prior to the declaration of the rank lists, the entrance commission has published the marks data submitted by the candidates for verification. The marks data could be viewed by entering the homepage of the candidate and giving their Roll Number, Application Number and Key Number. Students were given enough time to verify their marks. The marks data as on 09.06.2014 will be used for the preparation of Engineering/Architecture Rank Lists 2014.

The Engineering Rank list will be prepared by giving equal weightage to the marks obtained in the Entrance Examination for Engineering (Paper I & Paper II) along with the grade/marks obtained for Mathematics, Physics and Chemistry/Computer Science/Biotechnology/Biology put together in the Second year of the qualifying examination (Plus Two or equivalent).

According to the criterion, the rank list for Engineering Courses is prepared based on the total marks obtained out of 600. The marks obtained by the candidate in the Engineering Entrance Examination (Paper I & Paper II put together) is computed out of 300 and it is added to the total standardized marks of Mathematics, Physics and Chemistry/Computer Science/ Biotechnology/Biology as the case may be in the qualifying examination figured out of 300 making it a total of 600. If the marks submitted by the candidate used for the preparation of the rank list differ from the actual marks secured by that candidate, he/she will be disqualified along with liable for penal action in accordance with law.

The category/community-wise list 2014 based on the rank list will be published in due course. Candidates will be admitted to the courses only after verification made by the college authorities regarding the academic eligibility.

Kerala University degree admission 2014 centralized allotment process (CAP) online registration for the degree courses/ under graduate (UG) programme details are given here. The Kerala University has invited applications from candidates for their UG programmes in its affiliated arts and science colleges and UIT centres for the academic year 2014-2015. The submission of the application forms started from 14th May while the last date would be 5th June 2014.

Kerala Plus One admission 2014 -15 online registration is available at HSCAP website. Online registration of 2014 -15 admission for Ekajalakam/ single window system will start on 26th May @ www.hscap.kerala.gov.in. Kerala Plus One Admission 2014 is much important with around 3.27 lakh seats available for students in higher secondary school's first year batch and 26,750 seats in VHSE, the single window system would play a key role in providing admission to the students.

Online transfer and posting of teachers in Kerala 2014-15

KEAM 2014 online engineering mark submission/entry notification has been publicized at www.cee.kerala.gov.in, the official website of KEAM exams. As the notification regarding the submission of marks date for the preparation of engineering rank list 2014 has been announced, students who have qualified in the Engineering Entrance Examination 2014 should submit the marks obtained for Mathematics, Physics and Chemistry in the Second year of Plus Two through the official website.