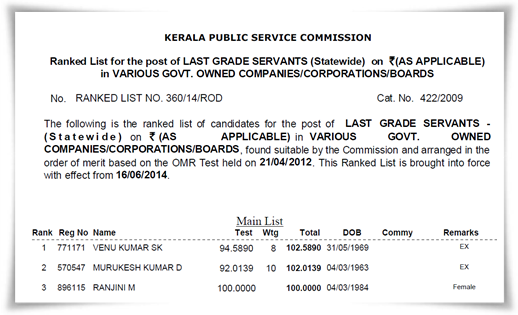 As the rank list is arranged in the order of merit, candidates who appeared for the exam can check the results with ease. Brought into force with effect from 16th June 2014, this rank list will be in force for a minimum period of one year till the publication of a fresh ranked list.

Candidates who secured top spots in the list will be advised for appointment,
in accord with the rules and orders regarding reservation and rotation. As the appointment depends on the occurrence of vacancies, it is not guarantee that all those who are included in this list will get appointment. Even though, the revaluation of answer script is not allowed, the answer scripts will be rechecked if application is being sent by candidates in the prescribed application form along with original Chalan receipt of payment remitted.

The applications for rechecking of answer scripts is available free of cost from the Enquiry Sections of the various Offices of the Commission. The application can also be downloaded from the Commission's website www.keralapsc.gov.in. The candidates, who necessitate the Photo copy of their OMR Answer Script (Part A and B) shall remit a fee of Rs. 200/- by way of Chalan in any of the Treasuries in the State.