Thrissur Pooram is known as Poorangallude pooram (the pooram of all poorams) because it is the most important and most famous pooram amongst all other poorams. It is now a globally recognized festival of Kerala. Thrissur pooram is celebrated once in a year, that is during the Medam month in the Malayalam calendar. The Medam month is represented from mid of April to mid of May. Along with Thrissur, some of the neighbouring districts and towns of Kerala also take active participation in this pooram, Thrissur always remaining as the host. On this day, a whole lot of crowd gathers together to witness the festival. Scores of people from the other parts of India and even from abroad India are attracted to Kerala to take part in the festival. As a result, Thrissur pooram showcases one of the largest gathering of people and elephants. The main temple for the pooram is the famous Vadakkunathan temple which is situated at the heart and centre of Thrissur town. The celebrations for this festival last for over 36 hours. The festival is confined to the temples of Devi (goddess) and Sastha (divine combination of Shiva and Vishnu). 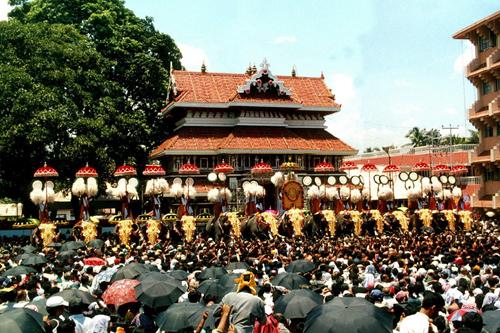 How was Thrissur pooram created

Thrissur pooram was created more than 200 years back by the then-reigning ruler of Kochi, Sakthan Thampuran or Raja Rama Varma. Before Thrissur pooram was created, the most popular temple festival used to be the one-day festival at a southern city of Kerala called Arattupuzha. Thrissur pooram was created as a result and a solution for the fights which used to take place between the Naduvazhi's (poojari's) of each temple. In order to stop the fights, Sakthan Thampuran made all the 10 temples that surround Vadakkunathan temple to unify and celebrate the Thrissur pooram together as the most important festival. These 10 temples of Thrissur were then divided into two groups known as the Western group and Eastern group. Thiruvambady temple which is located towards the West of Thrissur became the main temple under the Western group with some other temples such as Kanimangalam, Laloor, Ayyanthole and Nethilakkavu as a part of it. Parmekkavu temple which is located towards the East of Thrissur became the head of the Eastern group with other temples such as Karamukku, Chembukkavu, Choorakottukavu and Panamukkampally as a part of it. On the day of Thrissur pooram, each of these temples initially perform their own rituals for the festival and then send their elephants and procession to the main temple which is Vadakkunathan temple. The two groups also take images of the deities from their temples on the elephants towards Vadakkunathan temple. It portrays the salutation paid by the ten deities from the neighbouring temples to the main presiding deity at Vadakkunathan temple which is Lord Shiva. Each of these groups can display a maximum of fifteen elephants. Sakthan Thampuran had made it clear that there should be no discriminations during the Thrissur pooram and that every common man, irrespective of his caste or creed, should be allowed to celebrate the festival. The festival does not even differentiate between the religions and so, even the Muslim communities unite with the Hindu community in a secular nature to make the festival a grand success. Other than the Vadakkunathan temple, the processions that arrive from Paramekkavu temple and Thiruvambady temple are also very important. Basically, though Vadakkunathan temple is the main temple for the festival, it does not directly take part in the processions. It is just a meeting ground for the processions of all the other temples. One could say that Thrissur pooram festival is a competition between the two main temples, Paramekkavu and Thiruvambady which are rival groups. Both these temples have different sets of fireworks display and they compete to showcase a better and more grander procession. Both the groups take full efforts to acquire the best elephants available in south India and also try to make more creative parasols (umbrella) and ornaments to place on the elephants. 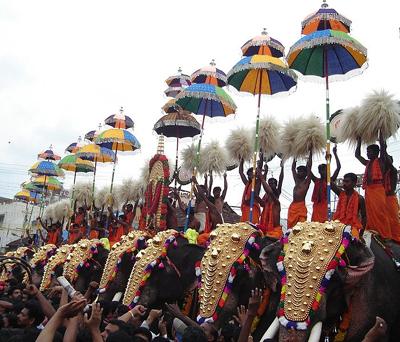 On the eve of the Thrissur pooram, a sample celebration of the event and fireworks is displayed. It is known as the Sample Vedikettu (the first round of fireworks). Since it is like a competition between the two temples, both the temples practice for the main event. One could call it as a rehearsal for the main day's programme but this day is also important. Many people who are not able to stand in the crowds and watch the main function are given a chance to admire the rehearsals of the festival as there is comparatively less crowd on the rehearsal day. On the day of the pooram, the elephants are grandly decorated with nettipattam (a decorative gold headdress) and more than 60 elephants pass through the Vadakkunathan temple. The elephants look extremely beautiful with the nettipattam, decorative bells, kolam etc. The mahouts of the elephants sit on each elephant holding a decorated parasol in their hand. Throughout the festival, the panchavadyam is played. A noise which would normally have been unpleasant or jarring has been converted by the people of Kerala into an organized rhythmic musical composition named as panchavadyam. Panchavadyam is a temple art which has been developed in Kerala and it consists of five instruments such as timila, maddalam, ilathalam, idakka and kombu. Kombu is a wind instrument while all the others are percussion instruments. The tempo of the beats keep increasing from time to time which make the people more excited and everyone joins in the rhythmic beats of the drum. This rhythmic sequence of drum beating is known as 'Pandimelam'. The people of Kerala are very fascinated by these sounds and the colours displayed on the festival day. When the beats reach a crescendo all the mahouts on the elephants change their display of the parasols. This performance is known as kudamattam which is a swift and rhythmic changing of colourful parasols moved in rapid succession across the top of lined-up elephants. The parasols are artistically painted in different colours. Almost before dawn the next day, fireworks fill the air for almost three hours. All this makes the festival the most dazzling and spectacular festival one could ever witness. Thrissur pooram ends with a stunning display of 30 elephants (15 elephants from each of the two groups) and a series of fireworks at 2.30am the next day.

Events and developments of Thrissur Pooram 2011