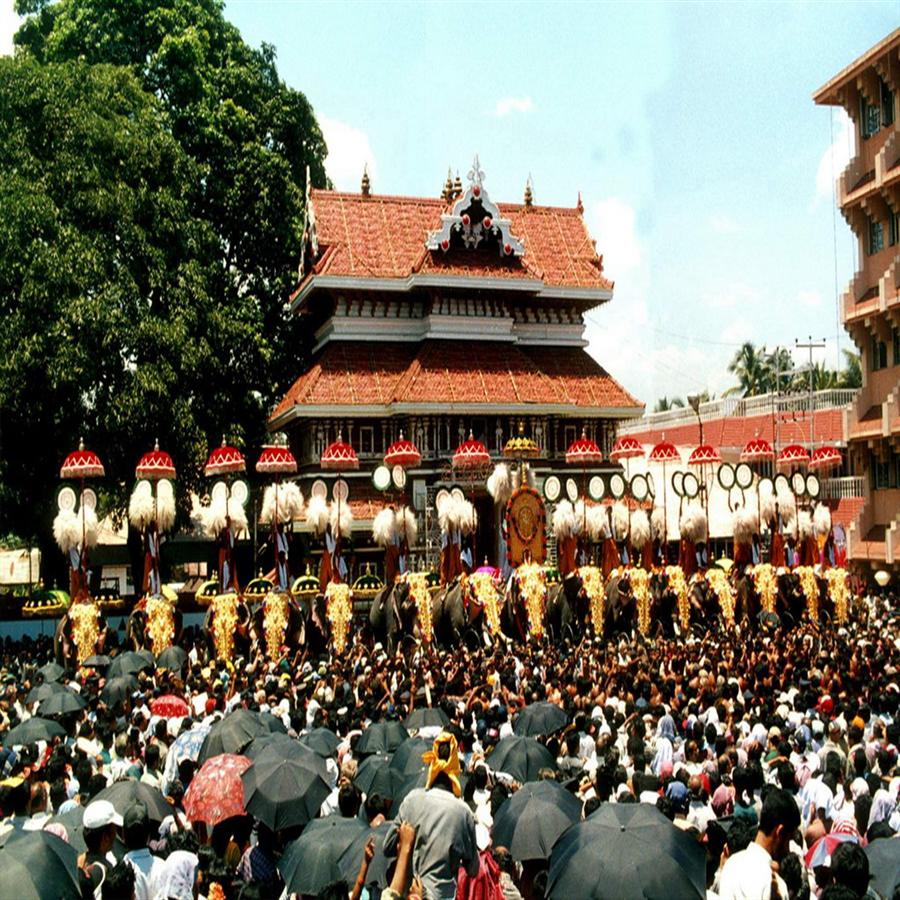 Thrissur Pooram in its present form was started about two centuries ago. Before that Aarattupuzha festival of one day was the largest temple festival during summer in central Kerala. Temples in and around Thrissur were regular participants in this festival. Once they were denied participation in the festival by the Aarattupuzha temple authorities. At that time, the ruler of Cochin was Prince Rama Varma also known as Sakthan Thampuran (1775- 1790 AD). In this case of the festival, he invited all those who were participating in the Aarattupuzha Festival to take part in the Pooram Festival devised by him to be held on yearly basis. He formulated a schedule of activities for the Pooram festival. Sakthan Thampuran instructed the Thruvambadi and Pamamekkavu temples, under his control, to extend all help and support to the temples participating in the Pooram Festival. Thus the Pooram festival started on competitive spirit between two groups led by Pamamekkavu and Thruvambadi. The festival begins at 6 in the morning of Pooram star day of Mesha and continues for nearly 36 hours concluding at 12 noon on the next day.

Essence of the Thrissur Pooram festival

The essence of the festival is that the ten deities from the neighboring temples assemble to pay obeisance to the presiding deity of Thrissur, Sree Vadakkumnnathan - Lord Siva. But he is only a spectator of the Pooram events, without any participation except that the major events of the Pooram are held in the premises the temple. Even though the festival is known as Thrissur Pooram, it is a very popular festival of Kerala.

Thrissur Pooram is a colourful and spectacular festival eagerly awaited by not only the people of Thrissur and surrounding areas, but the entire Kerala and some other parts in India and abroad. Since the advent of the T V Channels, this event can be watched fully sitting in the drawing rooms of people who cannot make it to attend the festival on the spot.

The festival contains grand programs like the procession of caparisoned elephants and the percussion performances of Melams and Panchavadyams performed by the best talented groups numbering about 200 each of Kerala. This takes us to blissful heights in a never ending succession of 36 hours. The crowning events of the festival are the 'Kudamatam' (umbrella change) just around the sun set and the spectacular fireworks at the pre dawn (3 – 4 am) of the 2nd day of the festival. The real competition of the 2 sides can be seen in these two programs to the maximum extent. These programs will take the spectators to the pinnacle of ecstasy. In a nut shell the Thrissur Pooram is a feast for the eyes, ears and the mind.

For the Kudamatam program around the Sun set, the best 30 elephants of various parts of Kerala, 15 each for the 2 sides are positioned in 2 rows with some space in between. These caparisoned elephants of the 2 sides beautifully decorated and made to stand face to face with each other are a spectacle worth watching. There will be instrumental percussion performances of chenda Melam and Panchavadyam in the space between the two sides. The competition is in the swift changing of the special umbrellas from both sides, one after the other with an interval of about 2-3 minutes. After the display of the umbrellas one side, the other will display it's umbrellas. After that the 1st one again opens its umbrellas and so on for about 1 hour. The umbrellas of Thrissur Pooram will be special in that they are spectacularly colored velvet covered. Each side and its supporters will be waiting with baited breath to see the unfolding of the next umbrella. No color or pattern displayed is repeated by that side again. The colours, patterns and designs of the umbrellas of both sides will be spell binding. This has to be seen to be appreciated and enjoyed.


Firework starts at 3 am and lasts till 6 am. The fireworks can be witnessed from any part of the city and surrounding areas of some distance as the fireworks will go up in the sky and explode. Some of those which explode will open up showing unimaginable colors and patterns in the sky. Others will explode with sound. The fireworks display also has the element of stiff competition of both sides i e the Pamamekkavu and the Thruvambadi. The color and pattern of each side will be spectacular.

The venue of the Pooram festival for the main events is the sprawling Thinking's Maiman, around the Vadakkumnnathan temple. One portion – on the eastern side - of the venue is booked much in advance by those who want to participate in the month long exhibition being held on the occasion of the Pooram. Another portion on the North side is occupied permanently by some offices.

The nearest Railway Station is Thrissur Station which is about 2 kms from the venue. Buses are available from all around Thrissur and neighboring states. Cochin airport is only about 50 kms from Thrissur.

The Pooram Festival of the year 2011 will start on 12th May morning and conclude at Noon on 13th May.