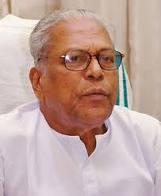 Birth: Velikkakathu Sankaran Achuthanandan was born on the 20 October 1923 in Alappuzha district of Kerala.

Parents: He was born to Sankaran and Accamma.

Studies and early life:He could study only up to 7th standard in school as his parents died when he was young. He had to support his brother and joined as his helper working in a village cloth shop. Later he took up a job at a coir factory.

Entry in Politics: During his work he had to undergo and witness harassments from managements and started working in trade union. Achuthanandan joined the State Congress in 1939. In 1940, he left Congress and joined as the member of the Communist Party.

Past Activities:Achuthanandan has played an active role along with others in the Punnapra – Vayalar uprising. He has worked as state secretariat member of the undivided CPI. In the CPI (M) he held the post of secretary of the Kerala State Committee. He was a member of the Politburo of the Communist Party of India (Marxist) from 1985 until July 2009. Thereafter he was reverted to the Central Committee of the party. He is one of the founding leaders of the CPI (M) in India, and the only living Keralite among the 32 members who left the CPI National Council in 1964 to form the CPI (M). He is the senior most leader of the party now. He was imprisoned for five and half years and was in hiding for four and half years during the repression of Communist Movement. He has worked as the editor of Desabhimani Daily', the mouth piece of CPI (M) in Malayalam.

Chief Minister Post of Kerala:V.S. Achuthanandan was elected as the 12th Chief Minister of Kerala in 2006 and held the post till May 2011. His actions as C M which attracted public attentions are the actions of the demolition drive in Munnar which claimed back acres of illegally occupied land, the demolition drive in Kochi M. G. Road which claimed back the long lost stretch of the road, anti-piracy drive against film-piracy and his struggle against the Lottery mafia in the state.

Family: On 18th July 1967, V.S. Achuthanandan married to K. Vasumathy and has one son and one daughter. Both are well settled in their own spheres and are married now