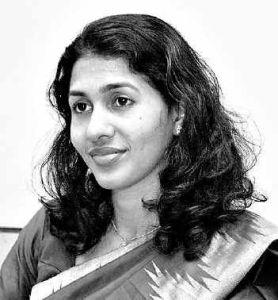 Anju Bobby George is a popular Indian athlete hailing from the state of Kerala. She is well known both in Kerala as well as globally for her renowned achievements in the field of athletics. She is the first Indian athlete to win a medal in the World Championships in Athletics. It happened in the year 2003 where she won a bronze medal in long jump. The event had taken place in Paris. As far as Anju is concerned, she feels that her best achievement till date is the one where she won a silver medal at the IAAF World Athletics Final in the year 2005. 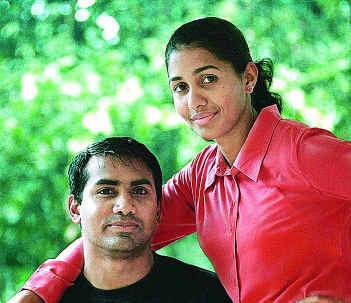 Anju George was born on 19th April 1977 in a place called Changanassery in Kerala. Her father's name if K.T Markose and they belong to the Kochuparambil family. It was her father who immensely supported her to achieve a career in athletics. Anju got her basic education from CKM Koruthode school from where she also got a lot of initial training for athletics. She attained her graduation degree form Vimala College in Thrissur district of Kerala. At post graduation level, she studied in the Calicut university of Kerala. Needless to say, she was very active in sports during her school days itself where she won numerous medals and trophies for hurdles, long jump and high jump. Anju George is already married to Robert Bobby George who was also quite famous previously in the athletic field. He was a national champion in triple jump. His athletic career got over in the year 1998. Ever since, Robert George has been coaching his wife Anju George. Robert George comes from a family of sports personalities which includes his elder brother, Jimmy George, who is a famous volleyball player. Another person who is responsible in molding Anju's talent in athletics is none other than the renowned international athletics coach, Mike Powell. Anju's modest character makes her give most of the credit of her success to her husband Robert. Anju George has an association with the Customs Department of India.

In the year 1999, Anju George set the national record for triple jump in the Bangalore Federation Cup. She started her athletic career with heptathlon which consists of hurdles, high jump, shot put, long jump, javelin throw, 200m and 800m. Soon enough, she realized that it was better to concentrate on one or two athletic sports and achieve the best in them. So she chose to excel in jump events. Eventually, she got her first big success in the 1996 Delhi Junior Asian Championship. 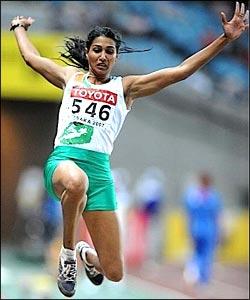 It was from the year 2002 that she started to be recognized on an international level in athletics. During her long athletic career, Anju George has faced a lot of injuries and harm to her physical health which brought few obstacles to her performances in some of the athletic events. In spite of such problems, she climbed the ladder of success with great speed. This can be proved by looking at her career graph which shows that in the year 2001, she was ranked 61 in the World ranking list of athletes whereas in the year 2006, she rose up to rank 6 in the list. Currently, she is known world wide as one of the best athletics.

As a matter of fact, Anju Bobby George's achievements have brought a lot of fame and recognition not only to herself, but also to India. She has performed extremely well at regional level, national level and international level. Such high talent and skill in athletics won her a lot of awards from various areas which includes the Padma Shri award from the government of India. She won this national award in the year 2004. She took a break from athletics in the year 2010 because Anju George and Robert Bobby George were expecting their baby and Anju wanted to keep away from the athletic tracks during that period.