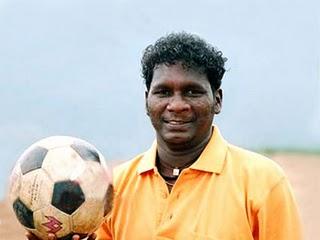 Inivalappil Mani Vijayan alias I.M Vijayan is a very famous Indian footballer hailing from the state of Kerala. He is considered as one of the best Indian football players. He comes from a very poor background but his talent took him to great heights in life. Vijayan's first job in life was as a soda bottle seller at the Municipal stadium in Thrissur. The job used to earn him only about 10 paise per bottle. But fate had better plans for him and his talent in football was recognized, after which Vijayan was chosen to play for the Kerala Police club at a very young age of 17 years. This was the turning point in his life as it opened the doors to a completely new world for Vijayan where he began to receive a lot of fame by becoming a household name in domestic football. His skill in the sport speeded his entry into the Indian National football team. He also went on to create history by becoming the highest paid football player in the Indian football club. In the years 1992, 1997 and 1999, I.M Vijayan was awarded as the Indian Player of the Year. Vijayan was invited many times by the Malaysian and Thailand football clubs to play for their teams but he dedicated his entire career to play with the Indian team. Vijayan is also the chairman of Boxer Sports Goods Company which is the first company from Kerala that manufactures sports goods. Even through all the fame and recognition, I.M Vijayan has never lost his down-to-earth nature. After the tsunami that took place in Andaman & Nicobar Islands few years back , Vijayan had offered to support the efforts of the government to start a football team in the island. He has also remained modest always and respects all those who were with him during his childhood. He makes sure that he gives his mother all the comforts of life that she could not have until he reached this position. In fact, his mother used to struggle for a living to make both ends meet. 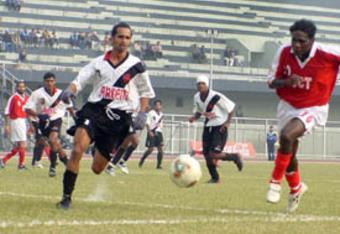 As mentioned before, I.M Vijayan comes from a poor background. He was born on 25th April 1969 in the Pulaya community at Thrissur district of Kerala. Today, Vijayan is well settled in life with a wife and three children. The first person who spotted Vijayan's talent and passion for football was the then prevailing DGP of Kerala, M.K Joseph. Vijayan did not let the opportunity go unheeded and took it as a challenge to show his love and knowledge of the sport. He did not disappoint M.K Joseph and proved the DGP's eye for talent by giving a splendid performance for the Kerala Police Club at Quilon Nationals 1987. His dedication and flawless skill in football sport was soon noticed by the national football authorities and in 1989 he got his first chance to play for India in the international level.

I.M Vijayan's last year of active participation in professional football was 2006 after he played for East Bengal Club for one year. From the year 1989 until 2004, I.M Vijayan represented the Indian National Football team in the international level. Vijayan has been an important part of many football tournaments such as Nehru Cup, SAAF cup, SAF, Pre-World cup and Pre-Olympics. Vijayan's partnership with Baichung Bhutia, another important Indian football, was a real pleasure to watch when both of them worked together to bring loads of laurels for India globally. Vijayan is also known as a deadly defender and striker. Vijayan retired from football in the year 2003. After his retirement, he has utilized his skill and knowledge in football by opening a football academy in his hometown (Thrissur) itself to train aspiring players.

Teams with whom I.M Vijayan has played

Kalo harin - a film with I.M Vijayan's life as the storyline

In the year 1999, director Cherian Joseph made a film called Kalo Harin which depicted the entire life history of I.M Vijayan. It showed the way Vijayan went from being unknown till he reached the pinnacle of success. It also depicts the troubles and ill treatments that an 'outcaste' has to face in India as Vijayan was also from a backward community. Kalo Harin went on to bag the national award and the John Abraham award. It was not a commercial type of film but still it was well noticed by his own people in Kerala who did everything possible to make the film more popular by showcasing it in the local theatres. It was the first time in Malayalam cinema that a non-commercial film was given so much importance. The songs of Kalo Harin, which were traditional folk songs, were composed by K Raghavan and became an instant hit among the audience. I.M Vijayan's real-life story is really unbelievable when one sees how a person from such a backward society went ahead in life to become the most paid footballer in India. One could also say that it was luck that played here so that Vijayan's talent was noticed by someone who could help him go ahead with his skill.

I.M Vijayan as a film actor

I.M Vijayan has not only football skills to his credit, but he has also tried his hand in the acting field and has been successful here too. Vijayan has acted in the movie Shantham in the main lead role. This Indian film has gained a lot of international acclaim and has bagged the national award for best film too in the year 2001. The film was directed by Jayaraj and the other cast included M.G Shashi and Seema Biswas. In Tamil too, Vijayan has acted in a few films. One of his Tamil films is Timiru where he plays a supporting role.