It would not be a tongue slip if sree padmanabhaswamy temple in thiruvananthapuram to be called as ‘India's richest temple'. Sree padmanabhaswamy temple situated in the heart of thiruvananthapuram, kerala would really find place in history to be tagged as the richest temple in India as vast treasure of gold was retrieved from one of the ancient temple in kerala. According to sources gold treasure was recovered from the old temple. A panel of 7 members appointed by the Hon.Supreme Court following a petition moved by advocate T. Sundararajan. The team of members had been in the temple for estimating the value of the gold treasure found inside the temple for the past one week. As the team of members were searching for the list of assets of the ancient Lord Vishnu Temple, it is said that they were mesmerized seeing the sight of the huge treasure grove in front of them. As per estimated value of the asset till Saturday, 2nd June 2011, the value of the assets will mount to worth of Rs 90000 Crore(around US$22.3 billion). If any one ask you ‘Which is the richest temple in the india', don't hesitate to say that india's richest temple is Sree padmanabhaswamy temple, thiruvananthapuram in kerala, India. Amazing facts from the temple explores that there are still more unearthed treasures hidden in the temple. Even the natives of thiruvanthapuram might have not dreamt of how a temple situated near to them would become much popular in a day. It's not night mare, its real time fact which reveals the story of unearthed gold treasures hidden inside the sree padmanabaswamy temple which had been amazing the world for the past one week.

Credited with the title ‘The richest temple in india, sree padmanabhaswamy temple', thiruvanthapuram in kerala has gone to fame in a week time. Being one of the oldest temple in kerala with lot of historical records, the temple got a wide spread global attention with the revealing facts which first seemed to be like a fairy tail. But when reports came up about the unearthed treasures which were being discovered, the world turned the face to know about the hidden truth behind the vast amount of wealth which was recovered from the temple site. For a person who had studied history, temples were places of not only worship but also a place where lies long stories of the past. The in famous sree padmanabha temple in the heart of the capital city of kerala, thiruvanathapuram has been one the most popular temple which had attracted many people because its historical importance. But now the temple has brought popularity not only to the country but also for those who love to know the historical importance of the temple. Kerala is one the state in India which has a long run history of kings, temples and much more historical monuments. The present discoveries reveal that the temple has hidden a vast amount of wealth which was unknown for centuries. 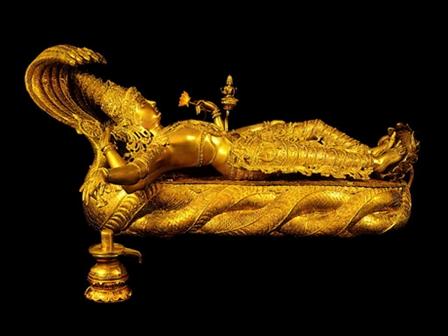 Its true that the temple is having much more to discover. The panel of team will reopen their search only after a discussion to be held on 8th july regarding the opening on the much expected chamber B as the world is expecting some wonderful objects to be recovered as per sources the team is to open the most important Chamber B which would bring wonders to the eyes of the world.

Read this article to know all the details of the gold treasures unearthened from Sree Padmanabhaswamy temple, Thiruvananthapuram in Kerala. Sree Padmanabhaswamy temple in Thiruvananthapuram district of Kerala has become world famous after massive amounts of treasures of gold and precious stones have been retrieved from the undergrounds chambers of the temple.

The author has taken pains to collect information about the treasure of the temple from various sources. From this information he has concisely given the picture of the inventory and brief details of the treasure items and the approximate value of the wealth.

I congratulate the author for his giving a bird's eye view of the treasure of the Sri Anantha Padmanabha Swamy Temple, in spite of his busy schedule.

Legally the padmanabhaswamy temple treasure belongs to the temple;since the temple and the treasure have been well preserved by the royal family,they should be allowed to do so without any intereference from the govt;the govt should provide adequate security;the treasure must be periodically audited by the court;the temple authorities should start a vedic school where hindus from all over the world can come and study the vedas;they should be provided free board and lodge;after completing the course, they can work in temples or perform rituals in peoples homes;the temple can also do some social welfare activities particularly in the former travancore region;

The author has to be congratulated for the attempt of posting this article. The details regarding the wealth are yet to come out, since just visual assessments alone have taken place. A committee under the convener-ship of Dr.Ananda Bose have been entrusted with the job of actual evaluation of the findings. Only after that a clear picture will be available.
As far as temples in general are concerned this type of hidden wealth are possible, no one has looked into it.

It is good to find out the wealth .... People make issue of this and create more problem. We should use this resource for the development of the state. Just by saving , what is the use. Use when we are alive.