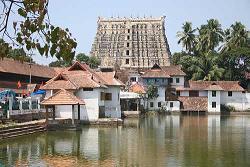 The famous temple of Kerala, Sree Padmanabhaswamy temple of Thiruvananthapuram has become globally known now after the findings of huge treasure troves within the temple recently. The treasure trove consists of gold coins, jewels and precious stones and were unearthed from the temple after a very long time of nearly 150 years. These gold treasures have been found after opening up several vaults of the ancient Hindu temple which have been sealed and locked up in underground chambers since 150 years. The unofficial estimates of the treasures equals to almost $22 billion (900 billion rupees). This is an approximate value as the inspectors and historians say that it is extremely difficult to assess the complete value of the treasures. Unlike the other temples in Kerala which are managed by the government, Sree Padmanabhaswamy temple is still privately managed and controlled by the Travancore royal family.

These vaults have been opened after the Indian Supreme Court ordered the handover of the treasures from the royal family's trust to the state. This order took place following a petition filed by advocate T.P Sundararajan who had doubts over the mismanagement of the temple affairs. It is amazing that inspite of light security around the temple premises, these treasures were never stolen neither misused till now. Till before the treasures were found, there was security only for controlling the huge crowds that gathers at the temple daily. Presently there is tight elaborate security at the temple as it has become the perfect grounds for numerous thefts to take place. Though more security will be brought, it will not hinder the normal temple activities nor will it cause any inconvenience for the devotees from their rituals at the temple. Undoubtedly, these treasures have transformed the already famous and oldest Hindu temple into one of the wealthiest religious places in India. It has even bypassed the Balaji temple at Tirupati which is also known to have gold worth crores and is currently the richest temple in India.

The vast treasures that have been retrieved from the temple have sparked a lot of debates from different sectors who give various opinions on how the treasure should be utilized. Social activists are recommending that the entire treasure should be handed over to a national trust which could use the wealth to help the poor and needy people. There are leaders such as those of the Hindu community, including the Chief Minister of Kerala, Oommen Chandy, who suggest that the treasure should remain with the temple as it is the temple's property and tight 24 hour security should be provided to protect the wealth. For a poverty-stricken country like India, this kind of wealth should be enough to solve atleast half of the economic problems. Historians say that the treasure is the public property which were hidden in those cellars by the former kings. There are still others like atheists who believe that it could have been black wealth gathered by the former kings and hidden in the vaults since there was poorer security methods in the olden era. The present heir of the Travancore royal family, Uthradam Thirunnal Marthanda Varma, does not want to comment on this argument as he believes that the wealth belongs to Lord Padmanabha.

Information about the underground chambers of Sree Padmanabhaswamy Temple 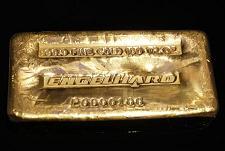 There are altogether six chambers in the underground cellars of the temple. Two of these chambers have not been opened for more than 150 years. Out of the six cellars that contain the treasures, only five of them have been opened for inspection. The last one could not be opened till now as it has some technical problems trying to open an iron wall which is built within the door of the cellar. Opening it could also cause some damage to the treasure that is kept within it. Moreover, the royal family believes that opening this last chamber could pose as a bad omen. A model of a snake is present on the main door of this chamber which indicates that the door should not be opened due to fear of bad luck. The vault or cellar has been opened very rarely. Infact, the last time it was opened was 136 years ago. Only after this vault is opened, a proper estimate of the value of the entire treasure can be given. The vaults were opened in the presence of a seven-member panel (appointed by the Supreme court to assess the value of the priceless objects) and observers.

Another interesting factor is that opening these chambers have also not been an easy task at all. Since these chambers have been closed for hundreds of years, it was difficult for the instructors to stay inside the chambers for long time due to lack of oxygen. The Fire and Rescue Services personnel and Health Department officials were told to come in order to help in case of any unexpected incidents. When each chamber was opened initially, huge quantities of mud were lying at the entrance. Dozens of sacks were needed to remove all the mud but later the officials realized that this mud could also contain some of the remains of the containers in which the precious stones were stored. 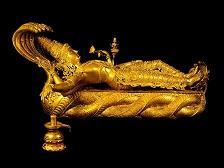 Oxygen masks were provided to avoid any health problems due to the lack of oxygen and also due to any poisonous fumes that could be filled in the air.

Evaluation of the findings of gold treasure in Sree Padmanabhaswamy Temple

Some of the pieces of treasures that were unearthed includes crowns, antique gold ornaments, vessels, gold lamps, necklaces, statues of gods and goddesses which are made of pure gold and studded with precious stones like emeralds, rubies, diamonds and many more jewels. These are all items which have been given to the temple authorities as gifts from the temple's devotees over hundreds of years. A specific evaluation of some of the findings from the temple includes an 18 foot long necklace, a golden idol of Lord Mahavishnu, two coconut shells made of pure gold (one of them studded with precious stones), a golden anki, a coin of 1914 origin, 500 kilos gold sheaf, 36 kilo gold veil, a golden bow, 1179 pounds of ancient gold coins, diamond studded plates, rubies and emeralds. The estimated amount of the massive treasure is almost three times the annual budget of Kerala.

Sree Padmanabhaswamy temple is one of the most famous Hindu temples and the deity worshipped here is Lord Vishnu. The temple is located at the East Fort near the KSRTC bus stand in the city of Thiruvananthapuram district in Kerala. It was built in the 18th century by the maharajas who were ruling the state of Travancore during those times. Lord Padmanabha is the family deity of the Travancore Royal house. The statue of Lord Vishnu here lies in Anananthasayanam posture (meaning in the eternal sleep of yognidra) that is in the reclining position on the thousand headed serpent Anantha. Sree Padmanabhaswamy temple is known as the holiest abode of Lord Vishnu. Only Hindus are allowed to enter into the temple. There is a strict dress code also which prohibits men from wearing pants/ jeans and anything above their waist and women from wearing churidars/ salwars or any dress which shows their legs separately. Sree Padmanabhaswamy temple is popularly known for its elegant architecture and exquisite granite engravings. It is said that there is a tunnel at the bottom of the chambers of the temple which leads to the sea.

Congratulation for the nice article on the treasure of Sri Anantha Padmanabha Swamy Temple, Thiruvananthapuram. The article is testimony for the effort taken by the author in collecting an enormous amount of information from various sources. She has gone even into the minute details as to the health hazard of the persons involved in the inventory and the precautions taken to take care of this aspect, the security aspect and the standby arrangements to meet any eventuality on this task.

The author has touched all aspects of the treasure and she has also given a brief sketch about the temple itself with the necessary details for any intending visitor to that place. Of course as usual she has presented this matter also in an attractive and presentable manner. This article will catch the attention of those who search for the treasure of the temple.