Recently, the United Democratic Front (UDF) government of Kerala has decided to raise the age limit for buying liquor from 18 to 21 years. This change has been made to reduce the number of teenagers who start consuming alcoholic beverages very early in their life. The new liquor policy was announced by the State Excise Minister K Babu. The policy states that from the year 2014, the bar licenses will be given only to five star hotels. It also states that the number of working hours of bars in Kerala will be reduced by three hours. 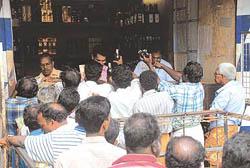 Kerala has long been known for its high consumption of alcoholic beverages. In fact it has gained a status of having the highest per capita consumption of liquor (8.3 ltrs) in India. The sales of liquor in Kerala has been rapidly increasing year by year at a deadly rate. Studies show that Keralites spend more money on liquor than on rice which is their staple food. One can see long unending queues in front of each and every bar, even in the most interior parts of Kerala. There are cases in which men booze so much that they fall in the middle of the road at night out of dizziness only to be woken up by some stranger in the daylight.

Even teenagers and adolescents have begun to consume these harmful beverages right from a young age because it is easily accessible to them. Many families break up just before of the bad influence of liquor on the behaviour of men towards the household duties. One can also imagine the number of road accidents also that are caused due to driving after drinking. This situation is most common among teenagers who venture out into the road in gangs after drinking without realising the dangers to their own life as well as to another innocent person's life on the road. They feel that doing such kind of actions make them 'cool' but they don't understand the seriousness behind the matter. They only want to imitate the western culture which includes going to pubs, drinking tonnes of beer etc. The television is also another device which promotes people to drink more by showing advertisements which mislead them to think that drinking is the latest trend or fashion. Moreover, in today's world the peer pressure is rising very fast along with the tensions and stress of competition and hassles of daily life. Thus, people turn to drinking in order to reduce their tensions which ultimately causes long-time damage to their health and personal life. The only way to stop or atleast reduce such young people from drinking is to make the beverage inaccessible to them. This kind of a new policy in liquor consumption is very important and hopefully it will prove to be useful in the right way.

Milma price to be increased from 5 September 2011

Read this article to know the latest news regarding the increase of Milma price from 5 September 2011 onwards. The Chairman of Milma(The Kerala Cooperative Milk Marketing Federation) is P. T. Gopala Kurup. Here you will also get informations regarding the prices per litre of varieties of milk.

I dont think only in kerala people are drinking more, I am currently working in A.P and there are numerous wine shops every where and there are queue in front of all of them. Number of liquor shops are less in a particular region in kerala so there will be long queue in kerala than in other states. And about the news regarding record breaking consumption, it is due to the fact that in kerala govt is selling liqour and therefore have an accurate figure where as in other states it is private parties, also most people usually go for foreign liquor in kerala which is costly while in other states there are many alcoholic drinks which are prepared locally and costs less.