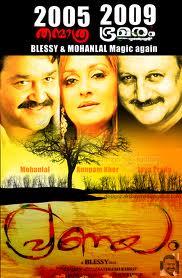 Pranayam, the new Malayalam Movie from Blessy with Mohanlal in important role, along with Anupam Kher and Jayaprada in the lead roles, has been in the news for quiet some time. There were reports that Mohanlal is only doing a cameo appearance in this film and have only 15 minutes in the entire movie. Later, the director denied the reports and claimed that it is Mathews, played by Mohanlal is the central character of the film and the story entirely revolving around him. Although he is entering the film in the later half, he is there about 40 minutes in the total running time of the movie. Remember, It is not the duration of time, but the importance given to the role is always the winner. Then why is the need for these talks ?

The much expected flick of Universal Star Lt. Colonel Mohanlal, is scheduled to release on September, 2011 as the Onam-Ramzan Release from the star. This is third time, Mohanlal and Blessy coming to gether after the success of critically acclaimed Thanmathra and Bramaram. The film is produced by an NRI Family Sajeev and Ann Sajeev under the banner of Fragrant Nature Films. The frames are handled by Satheesh Kurup while the script is from the director himself. Pranayam has songs penned by ONV Kurup which set tuned by M.Jayachandran. The singers are Shreya Goshal and Unni Menon.

Anoop Menon, Apoorva Bose, Dhanya Mary Varghese, Niveditha, Aryan and Nayana are the supporting cast in this film. The shooting of the movie is currently progressing on in Dhanushkodi and Rameswaram and is in the final stage. Meanwhile, Mammootty will not have an Onam-Ramzan release this year since his film King and Commissioner postponed. Also, his bilingual film Shikkari is planning to release for this Ramzan, but chances are rare. Now, the other important films for this Onam are Dileep's Mr. Marumakan and Prithviraj's Thejabhai and Family. Also, Joshiy's Seven is scheduled to release instead of K & C from Play House, the distributing company of Mammootty.

Get Pranayam Malayalam Movie Songs Lyrics I'm Your Man. 'I'm Your Man' is an album by Leonard Cohen released in 1988. This album gave Cohen much recognition and was the stepping stone for his successful journey in music.

Pranayam Malayalam Movie: Will the Magic of Blessy-Mohanlal repeat in Pranayam ?

Pranayam, the Onam Offering from Universal Star Mohanlal in the news store for some of its special features. It is the 300th Film of Mohanlal, 3rd film of the star with Blessy, Onam release of Mohanlal in 2011.

Pranayam Malayalam Movie: Any clue about the Story ?

Read this article to know the complete story of the New Malayalam Movie Pranayam of Mohanlal with Director Blessy. The film planned as the Ramzan- Onam release of 2011 slated to release on Septemper 8.

Preview, Story and release date of Pranayam Malayalam movie is given here. Pranayam is the Mohanlal’s movie and will be released during Onam and Ramzan season. Pranayam is directed by Blessy. Cast and crew of Pranayam are also included here.