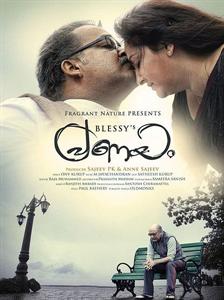 As the name of the film indicates, the theme is love. It is about the story of a middle aged woman Gracy (played by Jayaprada) who in her younger days loved a football player Achutha Menon (played by Anupam Kher). But by circumstances she had to marry a philosophy Professor Mathews (played by Mohanlal). The story gives a message that love has no age bar though it appears to be amorous. The film is expected to touch the hearts of the Malayalees because of the story and the acting by the 3 great artists.

The film is directed by Blessy who had the experience of worker under the great P Padmarajan. This expertise he has utilised in Pranayam.

The film has 3 great senior artists. One is our own megastar Mohanlal, the second is the Jayaprada who was a topmost artist of the South and Hindi film world and the 3rd is the inimitable Anupam Kher a veteran of Hindi Cinema.

With a good story and 3 of the greatest artists and a well trained Director, we can expect the movie to be a Box Office hit.

O. N. V. Kurup, the famous Malayalam poet, lyricist as well as professor was born to O. N. Krishna Kurup & K. Lakshmikutty Amma in the year 27 May 1931. This article gives an idea about some of the important poetic works & awards won by O. N. V. Kurup.