The day has just arrived as expected to showcase one of the biggest event in kerala prior to the kerala's own festival onam. It's the Nehru Trophy boat race named after Pandit Jawaharlal Nehru being conducted on the Punnanada Lake near Alappuzha. As it is celebrated on the second Saturday of August every year, in 2011 it would be today, 13th August 2011. This great event will be watched live by around 2 lakh people including hundreds of tourists from abroad. Today the tranquil lake front will be altered into a sea of humanity. All eyes will be on the staring point as the whole of kuttanad would assemble at the spot to watch the boat race live.

As per information, all arrangements have been completed and the stage of Punnamada River is set to welcome the special dignitaries to enjoy the massive event. The chief guest of 2011 Nehru Trophy boat race 2011 will be the Honorable Union Minister for Health & Family Welfare Sh. Ghulam Nabi Azad while the Honorable Chief Minister of Kerala Sh. Oommen Chandy will lay the foundation stone for Nehru Statue. This year the event is being sponsored by PACL Indian Limited. 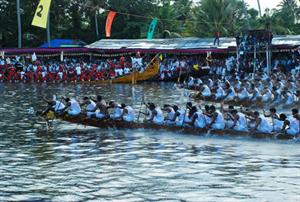 Being one the exciting water spot event, the Nehru Trophy boat race has called upon global attention. This boat race will add another feather to cap of God's Own Country,Kerala.

Almost all popular print and visual media not only of kerala but from out side India also will cover the whole event. Representatives of the popular media's in kerala had been camping for a week to get a glimpse of the arrangements of the boat race. All visual media's in Kerala including Doordarshan,Asianet, Kairali TV, India Vision, Reporter and Manorama News, Surya TV,Jeevan,Jai Hind and Amritha TV will telecast the event live from around 1.30 in the afternoon till the distribution of prizes.

Watch Nehru Trophy boat race 2013 live online streaming on various TV channels and websites. The live telecast of Nehru Trophy Boat Race 2013 will be available on Manorama News, Asianet News, Jaihind TV, and other local television channels while the boat race will be webcast live at the official websites. Read more to know about Alappuzha Nehru boat race and its live streaming details.