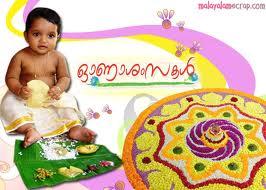 Onam festival is celebrated as a welcome gesture from us to the Mahabali chakravarthi (Emperor Mahabali) during his annual visit of his ex subjects. Thousands of years after his disappearing from the earth, we are still remembering and welcoming him at his supposed annual visits. We have no direct knowledge about him other than what was being told generations after generations. This shows as to how much beneficial his rule was to our predecessors. During the season even now we sing the age old song, which never fades unlike the modern songs. The song says that "maaveli naadu vaaneedum kaalam; maanusharellarum onnu pole; kallavumilla kalavumilla; ellolamilla polivachanam...." what a contrast to the modern, scientific and 'enlightened' society? If he comes and see us our doings and talks, we do not know what he will be thinking. As per the songs he has introduced the real communism or socialism in his empire without bloodshed, without slogan mongering, without cheap publicity, without blaming others for his deficiencies, if any. In fact he has given everything for the vainglorious king of gods in spite of his knowing the trap kept for him. Anyway that is a different matter. 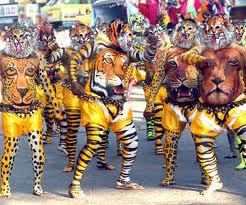 As to the Onam festival we associate it with the colorful pookkalams; the muddy mathevaers decorated with rice flour water lines drawn on the 4 sides of them and the flowers kept on the top; the ona pudava; the kalikal (games); the villu kottal (a instrument like the bow which makes a rhythmic sound when taped with a small stick; the pakida game; the ladies dances; the swing for children; the pulikali and kummattikali; and last but not the least onasadya. These are the social aspect of the onam and are a major part of the festival. There is one more aspect of the festival which is directly associated with the Mahabali's visit. What is that?

During onam celebrations Pooja or worship of Mahabali (Onathappan) is also done. The social aspect is followed in most parts of Kerala with only some minor variations. But in the worship aspect there are some differences in different parts of Kerala and even in the same area in different families. We are supposed to be worshiping Mahabali for the good he has done. But Mahabali was a ruler and was an Asura (demon – raakshasa) by birth though in practice he was of higher moral standard than that of even some of the gods. So instead of worshiping him directly, we worship him identifying him with the Mahavishnu, Maheswara and Durga. Normally we associate him with Mahavishnu only. But in many parts and even in the other parts also without our own being conscious of it we are doing Pooja to Maheswara and Durga. The worship of Mahavishnu we know very well and in one way or other he is connected with Mahabali and Mahabali was an ardent devotee of the lord. Though Mahavishnu punished Mahabali on behalf of the devas (gods), he allowed Mahabali to visit his ex prajas (subjects) on an annual basis. For the loss of his kingdom, Mahabali was made as the ruler of the 'Suthala' in the Paathaala loka. The Vaishnava Chaithanya (Vaishnava aura) was there to guard the Mahabali's 'Suthala'.

The Maheswara and Sakthi Connection

From the day of atham along with the pookkalams there will be mud made pyramidal forms of about one and half to two feet high and 3 square inches of base and one and half square inches of top decorated with ari maavu (rice flour) water and flowers on top. These are known as maatheres – mathevaers – mahadevars. We show lighted brass lamp and offer informal Pooja. The number of mathevaers will increase to 7 or 9 on the Thiruvonam day with so many other forms in mud with different names like servant, oilman etc. Then in the olden days in most houses on the Thiruvonam days the 'ammikkallu' (round cylindrical) grinding stone will be cleaned, washed and decorated with ari maavu kolam, and red flowers arranged in such a way to look as if it is adorned with a silk/velvet cloth with pleats etc. The ammikkallu is a symbolic Sivalinga. This will be placed in a rice flour kolam on a wooden plank (palaka) along with the mathevaers. The decoration and worship is done with the Thumba (a white small flower with a pleasing aroma) flowers. Where is Sakthi in this? Sakthi represents the nature and is symbolized by placing a Vaal kannadi (traditional bronze mirror like item with a handle). If the Vaal kannadi is not available in the house or even if available a Vaal kannadi like thing is made of mud and is kept symbolizing the Sakthi. The naivedyam (eatable items) items include the appam (a sweet half ball like item made of a mix of rice flour and jaggery deep fried in ghee or oil), ada (an item like a stiff dosa), malar (puffed rice - paddy dry fried and husk removed) and avil (rice flakes) etc, which are normally offered to Shiva and Sakthi. This also indicates the ancestors' idea of worshipping nature which provides us all our needs. The ammikkallu due to its shape stands as a substitute to Sivalinga. It also can be assumed that the ammikkallu represents the cooking implements of the olden days and we are giving it a day's rest with lot of respect and gratitude for its service in our cookery preparations.

A different version of Onam

There are some places in Kerala where onam was celebrated in a different way and at different time. These places used to observe onam period from the Thiruvonam day of Karkidaka maasam ( a Malayalam month corresponding to Aug – Sept of English calendar) to the Makam star day of Chinga maasam. This is known by the name pathinaaraam Makam (16th day Makam). The onam ends on the Chingam Makam. These people were not using Pookkalams; instead they used to prepare the kalams (rangoli like designs) with charcoal powder mixed with chaanthu (a village made eye Tex – black paste for eye). This practice is almost extinct now.

This is one aspect of the Onam celebrations which is not usually mentioned in the literatures of the festival. That is why this article is separately prepared for brining it out to the fore front of our memory to prevent it from being lost.

Get the best onam songs lyrics. Kerala is very rich in folk and traditional songs and has variety of folk songs as there are variances in the situation, land, people and their occupations. In yesteryears Onam songs was the major part of Onam. Lyrics of some Onam songs are given here.