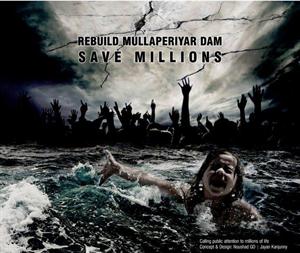 It's now just a short break for the social media interested folks from passing funny jokes. But now they are really much involved in supporting 'Mullaperiyar' by sending messages, photos and even joining the campaigns which has even now given energy for the natives, even for the keralites who are living away from the land. The mass support for Mullaperiyar is going viral over the social media networks, especially on facebook and twitter. Some SMSs and photos are really heart breaking, while some are of blaming the TN government and also about the strange decisions of movie stars keeping their mouth shut about this issue.

'Tintu Mon Fans Association India' is a fans page created with around 35,000 likes which stick on passing creative jokes for quite a few years. But now this group too has joined the campaign by passing creative photos and SMS which are motivating the younger generation to support the mass campaign. 'IHP' is also another top hit facebook page among the young Kerala which already has around 29,000 fans. Few weeks back the administrators had urged the members to join the 'Save Mullaperiyar Dam' which had gone viral making many to join the campaign.

'Save Mullaperiyar', 'Save Kerala' is the most active page in Facebook with 14,ooo likes, which had been in front which even had taken initiative to arrange a campaign in Kochi. 'Strikers and Crew' also another group with 15,000 members also kept their voice high regarding the Mullaperiyar Issue. 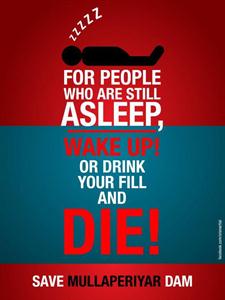 There are few groups in facebook which has come forward to make the young generation of Kerala more aware about the dangerous situations. The mighty educated Keralites are really on the war to save the life of 40 lakh people. Evoked by the face book messages hundreds of youth has shown their presence by visiting the people who are fasting for months to get the problem solved in an amicable manner.

Here are some of the SMSs which are being passed from mobile to mobile in support of the Mullaperiyar.

1. MULLAPERIYAR!! the oldest gravity dam built on 1896 is still running even aftr its expiry date of 50 year; i.e. 63 extra years!now its on the verge of explosion n if tht happens it'll be the biggest disaster in the wrld history. 45 lakh people in mid kerala wud flow dwn the arabian sea within mins.since our leaders seem to be unaware n ignorant abt it,be ready to face a tragedy which will ruin the better part of God's Own Country 4evr!!

2. 'Blood is thicker than water. So let's put our hands 2gether 2 save Mullaperiyar, 2 save Kerala!'

3. 'Save Mullaperiyar!!! We can't hold any of our patience.'

Mighty thoughts! Does it make you think? Then it is the right time. Do share.

NB: We have uploaded few photos and SMSs shared by our friends in facebook. All the credits goes to those who have designed and created it.

Keeping the slogans high ‘ Rebuild Mullaperiyar Dam’ - ‘Save Kerala’, a social gathering at marine drive in Kochi organized by the ‘Save Mullaperiyar Save Kerala’ Facebook group has really shed light to an upcoming disaster being which people in Kerala might have to face in the coming future. Let this be the first foot step for our desire to live.