Mohanlal will be busy in 2012 with a handful of movies which is being plotted in such a manner the audience keep it close to their heart. He had been a visual magician, not only by the way of his charming look, but also with verbal treat which the malayalee audience cannot forget. The masculine form of presenting each character added to his breathtaking performance made him a house hold name among malayalees around the world. Everyone who loves to watch him on big screen would be keen to hear the way he presents a dialogue just exactly like keeping the tongue close to a fresh water lemon. The actor who had been in front entertaining the audience with his delightful act is eying the year 2012 to be more successful with a number of movies on queue. 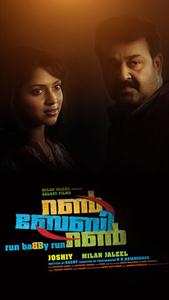 In the last week of April 2012, two movies of Mohanlal will be hitting the screen. 'Grand Master' directed by B Unnikrishnan while the other will be a bollywood movie 'Tezz' directed by his soul mate Priyadarshan. Tezz will be released on 27th April 2012. The project which is on roll is 'Spirit' directed by Ranjith. After the schedule of this movie comes the biggy 'Run Baby Run'. After a short interval Mohanlal and Joshiy teams for a movie which is being screen played by Sachi. Well you might remember the works set by Sachi – Sethu. After Christian Brothers, Mohanlal and Joshiy are up with 'Run Baby Run' which will feature Amala Paul as the heroine. As the name suggest 'Run Baby Run' is a fun filled movie having all the ingredients of a real entertainment. So are you ready to take a ride?

Through 'Run Baby Run', Joshiy keeps a change from his usual action packed movies. This would be a pure entertainer at its best for malayalees who loves to giggle inside the dark room (movie theatre) rather than getting bored with dialogues which resembles an elocution competition.

Amala Paul is back in Malayalam after giving her act in the non commercial movie 'Aakshinte Niram'. Amala Paul born as a Keralite has well established her foot in tamil movies. In this movie Mohanlal characterizes the role of a TV channel cameraman while Amala Paul works as a senior editor in the same channel. The hilarious relationship between the duo and how they handle a meticulous project makes the movie uproarious. So expect a magical treat from Mohalal –Joshiy which will be a real ride for movie lovers as it hit theatres. Get ready to move from the seat and say ' Run Baby Run'.

Read the details of upcoming Malayalam movie Run Baby Run here. The comedy thriller film is directed by hitmaker Joshiy and stars Superstar Mohanlal and Amala Paul. Mohanlal plays a cameraman in the film. It will be the Onam release of Mohanlal. Read more below.

Run Baby Run malayalam movie releasing date is set for 29th August 2012. This article will let you to know about run baby run movie story, name of actors, actress and technicians, who worked hard for this film. Hope this movie will be one of the blockbuster movies for Kerala super star Mohanlal. Read more about release date, expectation, story of this Run Baby Run Malayalam movie.

Run Baby Run malayalam movie review is given here. The movie directed by Joshiy starring Mohanlal and Amala Paul in the lead was released worldwide on 29th August 2012 over 450 screens. Run Baby Run is one the most hyped movie in malayalam which will hit theatres on Thiruvonam. Read more to get the details and review of Run Baby Run.