2012 Run Baby Run Malayalam movie is one of the latest movie in Kerala which will be released during Onam festival. Run Baby Run directed by great director Joshiy is power packed with successful story, songs and music and all. 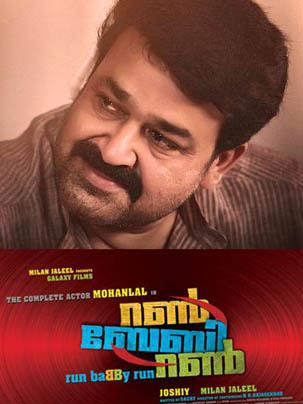 The release date of Run Baby Run is August 29, 2012 that is on Onam festial. Along with this movie, many movies are going to be released during Onam season. Fans of different actors are eagerly waiting to hear the word "hit". Mohanlal is the leading and famous actor hence expectations for this film are in peak range. According to the prediction of experts of film industry, this movie is going to rock the Malayalam film industry.

Mohanlal will be dealing a crime act with Amala Paul and Biju, in which they face numerous problems. While dealing it, Mohanlal and Amala Paul will fall in love. Love of Mohanlal and Amala Paul will be just a part of this film, which will not divert the story of this movie. Shyam Sasidharan has played a perfect role in editing this film. In this movie, you can expect love, comedy and thrilling experience. What is crime event dealing by Mohanlal and co, whether they revealed the crime act to public, have they escaped from the problems, are the questions that I am going to keep in your mind. You can get answers for these questions by watching the "Run Baby Run" movie. Run baby, to book the tickets.

The director of Run Baby run movie is Joshiy who gave the successful movie "Christian Brothers" in 2011. This film is produced under Galaxy films banner by Milan Jaleel. The story being the heart beat of the movie is written by Sachi.

In this film, you can come across six beautiful songs. All songs are written by the poet Rafeeq Ahmed. Songs and the background music of this Malayalam movie are composed by the Music Director Ratheesh Vega. Costumes for Mohanlal, Amala Paul and other co-actors are designed by the talented costume designer Palani. Apart from Mohanlal, amala Paul and biju menon, Vijayaraghavan, Siddique, Sai Kumar, Krishna Kumar, Aparna Nair, Biju Pappan, Shammi Thilakan, Sreerekha and Mithun are few other known personalities, who acted in this film.

Through the success of this movie, Amala Paul will get more offers to act in Malayalam movies. Even though many movies are releasing along with movie, eye of more number of Kerala People are on this movie, as Mohanlal is acting in this film. Let us wait and watch the changes that are going to bring by the Run Baby Run movie.

Read the details of upcoming Malayalam movie Run Baby Run here. The comedy thriller film is directed by hitmaker Joshiy and stars Superstar Mohanlal and Amala Paul. Mohanlal plays a cameraman in the film. It will be the Onam release of Mohanlal. Read more below.