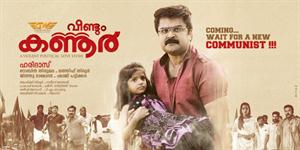 Veendum Kannur is an upcoming malayalam movie from director Haridas Keshavan, under the banner of Golden wings international by Lathif Thirur. The movie Veendum Kannur is a sequel of the film Kannur released 13 years ago, which discuss the political scenario of the state. The sequel Veendum Kannur deals a love story with a political thread woven into it. The movie tries to draw a change in political scenario not only in Kannur but also in the Kerala state. The major role of this film handled by the emerging youth icon Anoop Menon. Popularscript writer Robin Thirumala penned the story and screen play of this film. The actress who is well known by the name Kathal Sandhya plays the heroine character of this film.

The discussion to make this film has started 2 years ago which took so many changes in casting actors suited for the characters. The first decision was Manoj K jayan himself to play the central character, later changed to Tamil actor Bala and Aiswarya Muraleedharan as the cast. But that also fails and reached to Anoop Menon and Kathal Sandya. The name of the film also had doubt, whether it should be Kannur Veendum, but finally fixed the name to Veendum Kannur. Thilakan, Janardhanan, Shivaji Guruvayoor, Zeenath, Rajiv Pillai, Risa Bhava, Tini Tom, Irshad are the others who would give life to other major characters in this film.

Crew in the film Veendum Kannur


Veendum Kannur is the story of Jaya Krishan who are the son of the old famous politician Madai Surendran in Kannur. He worked in Thajmahal archeological department in Agra as a guide. He had a different view of new age politics apart from his father Madayi Surendran. Anoop Menon plays the role of Jaya Krishnan. While Shivaji Guruvayoor handles the role of Madayi Surendran. Radhika is doing research in an archeological department. The role of Radhika is handled by Kathal Sandhya. They meet in their field of work. Eventually they fall in love. This makes a twist in the life of Jayakrishnan. The story leads from this and deals with the current scenario of the politics in Kannur as well as in the state of Kerala.

The shooting of this film was carried out on Agra, Kannur, Kozhikkod, Palakakd, Ernakulam, and Kasargod. The film is almost completed and likely to be released this year itself. The theme of the film unveiled, how the politics deflects the growth of Kerala. Let's hope this will be a much discussing topic in the Kerala, and Anoop Menon who has been a part of many successful films will add another golden feather to his cap through this film.

Veendum Kannur malayalam movie preview, story and cast are added here. Read the story, cast and crew details of the upcoming Malayalam film Veendum Kannur. Anoop Menon and Sandhya portray the lead roles in Veendum Kannur. The political thriller is directed by Haridas and is a sequel to the hit film Kannur. Read more below.