Onam 2012 Festival is the great festival which can celebrate by Kerala peoples. Onam is one of the most famous festivals in Kerala. Know more about Onam festival and its celebration details here. 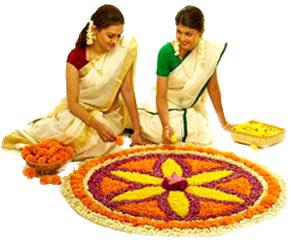 Onam festival is the biggest and most prevalence festival in Kerala. But, beyond the festival and the celebrations, there is a lot about the Onam 2012 Festival. It will replicate the people's faith and their hard work. A belief, that people, who are following the actual rituals, to celebrate festival, will get high spirit from their beloved God. The Onam is a harvest festival and the Malayalam's New Year will start in this day.

The eye-catching landscape and the green carpeted surface will impress everyone. Even the sunny rays will also feel the warmness and enjoys the snows. Everywhere, the fields will be poured with copious harvest and the farmer's hearts will be stuffed the pinnacle of happiness and humble pride. The sweetness in their sweat will be resulted during this celebration. This festival is celebrating to invite the King Maveli and also it is crediting the honor of the King Mahabali. This king will be warmly called as Onathappan.

'Tourist Week' for Kerala during Onam

The Onam 2012 Festival will be celebrated in the month of Chingam, which is the beginning month in the Malayalam Calendar and this will be occurred in between the month of August and September as per the Gregorian calendar. The first day of the Onam will be Atham and the tenth day will be Thiruonam, which are the most significant of all days. The whole festival will be arranged with hectic agenda folk songs, vigorous dances, boat races, flower decorations, feasts, games, which are the vital parts of the Onam festival. The Government of India has considered this festival as so vibrant and colorful. Hence, they have promoted as "Tourist Week" during the festival of Onam in Kerala. During this festival, numerous numbers of people will gather here and celebrate with the domestic people.

There will be several interesting legends behind the origin of the Onam. The festival will be commemorated by all the folks in the Kerala, and, there will be no partial, no caste and no community to separate them from the crowd. The King Mahabali and the boats in Pallikodam will bestow the special treat to the children and the teenagers. During the period of his Kingdom, the people were free from the sad, poverty, sorrow, diseases and they had not feel for anything for any cause. There were no felony and no corruption under his kingdom. Hence, people had crowned him and stated in the unsurpassed position. Just rush there to enjoy the taste of fruitful entertainments in the festival. The big history of King Mahabali will be taking a huge page to enroll all.

Traditions for the Atham Day: The first day of the Onam festival will be began with the Atham day, and the significant thing about this day is the Pookolam. The flowers will be spread as the carpet and the Attha Poo will be arranged in front of the courtyards, where the statue of the King Mahabali will be placed. Similarly, the size of the Pookolam will be increased as the days increased till the tenth day.

Traditions of the Thiruonam: The last day of the Onam festival will be Thiruonam, where the grand decorations will be made in front of the courtyard and every people will enjoy their day as much they and it will be their best days in life.

There are five eye catching festival attractions in Kerala and they will be more special than anything and you will enjoy the colorful and the gorgeousness, everywhere in Kerala and those are the thripunithura athachamayam, feasting, pulikkali tiger play, aranmula snake boat race and the flower decorations.