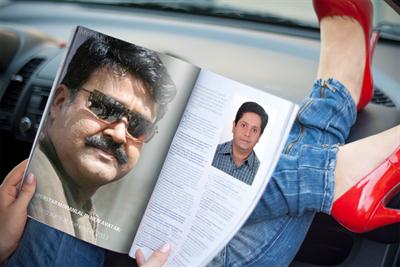 After getting high regard for his previous flick with Dileep and Mamta Mohandas in lead, Jeethu declared 'Memories' as his next project with Prithviraj and Mia in lead. With the pre – production and script works of Memories are going on in full flow, the director has announced his new venture – My Family', with Mohanlal as hero. From the words of the director, superstar Mohanlal will be seen in a new avatar, not seen yet.

This family entertainer will also have two women in powerful roles as the movie give due importance to female characters as seen for his previous movies like Mummy & Me and My Boss. Jeethu feels that it is very hard to find a suitable actress who could don the character role as the mother of a teenager. 'My Family' revolves around the life of a man who is much connected to his family. Even though there had a number of movies earlier made in malayalam dealing with the same subject, the treatment of the movie would bring the difference.

'My Family' will start rolling only at the end of 2013 as Jeethu is concentrating on his upcoming project 'Memories'. This movie is a suspense thriller connected with a murder mystery and its investigation. Prithviraj who dons the character role as a drunken police officer would investigate the murder while 'Chettayees' movie fame Mia would be seen as a journalist. Produced by P.K Muralidharan and Santha Muralidharan under the banner Anantha Vision will have its first schedule in April.

Jilla tamil movie starring Mohanlal and Ilayadalapathy Vijay directed by Nadeeshan will start rolling from April 2013. To be produced by R B Chaudhary under Super Goods films, the movie will bring two superstars together. As per initial reports Kajal Agarwal will join Vijay as heroine after the grandiose success of Thuppakki.

Ladies and Gentleman Malayalam Movie – Mohanlal and Siddique Back Again

Red Wine malayalam movie will be the directorial debut of Salam Palapetty who will start his maidian project with Mohanalal. Young charming actors Asif Ali and Fahad Fazil will play lead roles along with Mohanalal sharing screen space with the actor for the first time. Salam Palapetty who worked as the assistant of Lal Jose from Meesha Madhavan till the recent release Ayalum Njanum Thammil is becoming an independent director with Red Wine.

Lokpal malayalam movie - Mohanlal and Joshiy aiming yet another blockbuster

Lokpal malayalam movie wil bring Mohanlal and Joshiy back gain after the success of blockbuster movie Run Baby Run. The shooting of Lokpal is currently under process in kochi. Lokpal movie is planning to be released on 24 January 2013.