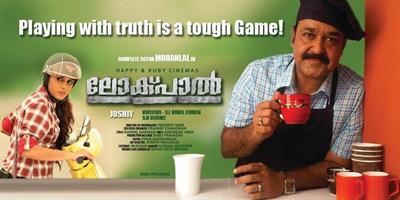 After the blockbuster hit of Run Baby Run, Joshiy and Mohanlal are joining hands together for their next movie 'Lokpal'. As the name indicates, the movie doesn't go up with political thinking but it is based upon the corruption in the country. Mohanlal and Kavya Madhavan are in the lead roles while Meera Nandan, Manoj K Jayan, Vijayaraghavan and Saikumar are playing the supporting roles. The story line is written by S.N Swamy. After the blockbuster film Naduvazhikal released in 1989, SN Swamy, Joshiy and Mohanlal are teaming up after 22 years.

Mohanlal in the movie runs a restaurant in Kochi during day time and works as a under cover social activist. The movie is produced by SL Vimal kumar, Balan Vijayan and M Vijaykumar together under the banner of Happy And Ruby Group. SL Vimal kumar is the General Secretary of Mohanlal Fans And Welfare Association. The pooja of the movie was held on 10th September 2012 at Holiday Inn Hotel, Kochi. The shooting of the movie is under progress at various locations in Kochi.

The soundtrack of the movie is done by Ratheesh Vegha, who made Mohanlal to sing the superhit song 'Aatumanal Payayil..' from the movie Run Baby Run. Ratheesh Vegha is a creative music director. The lyrics are written by Rafeeq Ahamed. The cinematography is done by Pradeep Nair, who has moved camera for the movie Janapriyan (2011) and Nallavan (2010). Editing work is handled by Syam Sasidhran, who has last edited for the movie Run Baby Run. The movie is being distributed by Maxlab Entertainments.

The movie showcases much about the lifestyle of Kochi and also describes all about the corrupt politicians and superior government officer's, who are totally involved in corruption. The movie is mainly about political thinking. The story line of the movie make good sense to the audience, that showcases the things which are currently going on in the state.

The movie has a good theme which could be expressed to audience through different characters in the movie. A director must be much sure about the story line of the movie's which he is directing. Director Joshiy is looking forward for the next hit of him and mohanlal duo. Lokpal is slated to get released on 24th January, 2013.