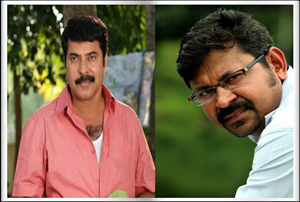 If you are a film maker planning to do a movie with Mohanlal or Mammootty in the lead, please do think about it after 2 years. Already the pouches of the actors are full with around 10 movies in line including filming and committed projects. While movie producers are standing in queue to get the date of the superstars, it would be Salaam Palapetty who had hit the real jackpot. After roping Mohanlal in lead in his directorial debut 'Red Wine', now heard it through the grapevine Salaam will make his second movie with Mammootty in the lead. The untitled project which starts rolling only in March 2013 will be a delight for movie lovers.

During his 3 decades of film career, Mammootty had done several characters which had amazed the audience. But the role of the actor as a 'Priest' in the upcoming movie would be something special to watch. Even though Salaam had announced this project much earlier with Mammootty, the project was extended to 2013 due to date issues of the actor.

Mammootty has already committed to a handful of movie to be done next year including Kunjananthante Kada, Kammath and Kammath, Praise the Lord, Arivaal Chuttika Nakshatram and Marthandan Puthran. While his 'Face to Face' will reach theatres in November, Bavuttiyude Namathil would be Christmas treat.


Meanwhile 'Red Wine' would bring Mohanlal, Fahadh Faasil and Asif Ali together for the first time which tells an extra ordinary story weaved with suspense. Mohanlal who vacillate to give date for new comers had no choice other than giving the green signal right after hearing the script. It would also be a delight moment for Mammen K Rajan, the script writer who has years of dedication in malayalam film industry. Mammen himself will sew the blood, flesh and soul for 'Red Wine' as screenplay writer.

Salam Palapetty who has a long years of experience behind the camera working with Lal Jose for around 10 years starting from
Meesha Madhavan till the recent release movie Ayalum Njanum Thammil, will be much fortunate to start his new innings as director working along with the Big 'M's Mohanlal and Mammootty. So let's hope Salaam could build a majestic career as director and pool him into the minds of movie lovers.