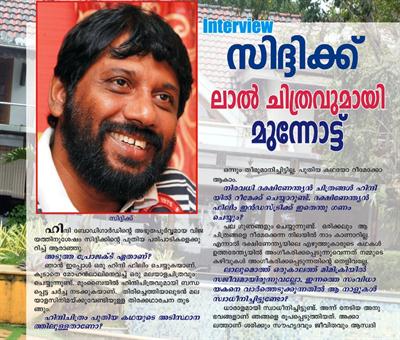 The hit maker Siddique is pairing up with Malayalam superstar Mohanlal after a long gap of 18 years. Both were last seen in the movie 'Vietnam Colony' which was a super hit in 1992. The film still exists in the minds of people. After Siddique completes the bollywood film staring John Abraham, he will start the work for the script with the malayalam movie. In 1990s, Siddique–Lal combination brought many super hit films in malayalam including 'Godfather and Ramji Rao Speaking. But later Lal and Siddique decided to direct films independently. Siddique become an inependent director giving hits like Friends, Chronic Bachelor etc. Even though the malayalam movie Bodyguard did not do well in the box office, the tamil and Hindi versions were commercially hit.

Now, after a long gap, Siddique is ready to do a film with Mohanlal named as "Ladies and Gentle Man". The movie will be produced by Antony Perumbavoor under the banner of Ashirvad films. As the viewers expect more from the director, the script should be fine tuned to match their interest. We can expect that the movie will be a complete entertainer.

Ladies and Gentleman Malayalam Movie – Mohanlal and Siddique Back Again

'Ladies and gentle man' is a nice film and lal - lalettan pair has made a great entertainer for malayalee fans after 18 long years. It is a different and entertaining film which everyone should defenity watch. Fans expect more and more super hits from this pair as they are greatly talented and dedicated too.