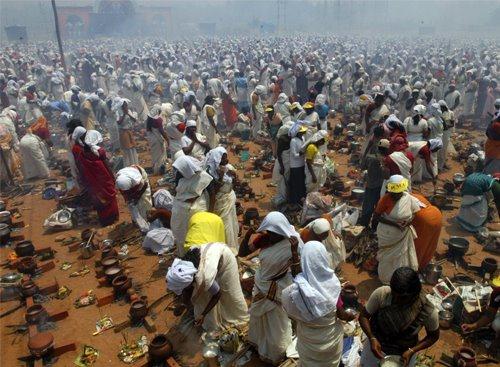 Attukal is a popular Hindu pilgrimage centre situated in the heart of Thiruvanathapuram in Kerala. Situated about two kilometres away from the famous Sree Padmanabhaswamy Temple, the place has made its name with the presence of the Attukal Bhagavathy Temple which is one of the ancient temples of South India. Popularly known as the Sabarimala of Women, the temple attracts women from all part of the country to come together and get the blessing from the Goddess in Attukal temple.

The pilgrims who gather at Attukal temple would pay a visit to shrine of the supreme Mother Attukalamma. Every year millions of women gather for the annual Attukal Pongala Mahotsavam, a holy ceremony which is considered to be very special for each woman who prays to the Devi to get her blessings. In 2013 the Attukal Pongala(Ponkala) Festival which began on 18th February will witness the world famous Attukal Pongala which is scheduled for 26th February. 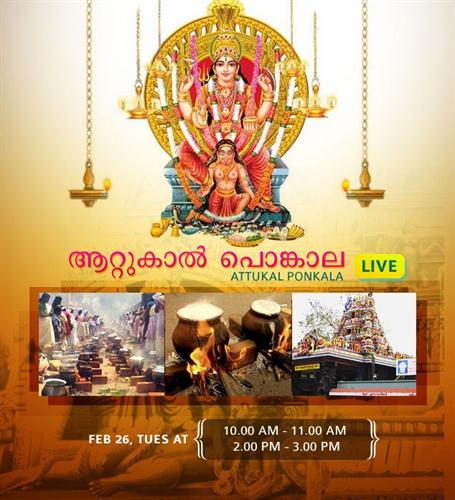 The rituals which commences at 10.45 AM with the lightning of the Pongala Hearths will be followed by the sanctification of Pongala at 2.30 PM. The famous Chooral Kuthu ceremony with Kuthiyottam devotees joining the procession will be followed at 7.30 PM. The functions of the day will end with procession of the Goddess. On the final day, Akkathezhunallippu or re entering of the Goddess to the Temple will be performed. The festival will be concluded with Kuruthi Tharppanam.

According to mythology, Attukal Bhagavathy is considered to be an incarnation of Kannagi of Silapathikaram. Devi Kannagi, who has immense influence in the tradition and culture of Tamil Nadu and Kerala, do have four temples - three in Kerala and one in Batticalao in eastern Sri Lanka. As per the legend Kannagi, after putting Madurai to ashes, came to Chera Nadu, the present Kerala. During the journey, her feet touched the cold waters of the Kili in Trivandrum. Thus came the name Attukal, which originated from two words -Atturu – river and Kal – feet. The year 1997 witness the largest gathering with around 18 lakh women assembled in the temple. In 2013, the organisers hope that the number would touch 28 lakh which would break the earlier Guinness world record making it the largest congregation.