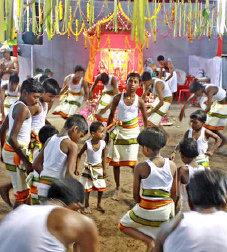 Onattukara was a principality of ancient Kerala. This place was also known as Odanad, which included places from Kannetti to Thiruvalla, that means the portion of Chengannur, Mavelikara, Karunagapally and Karthikapally taluks were in Onattukara. Its original capital was at Kandiyur Mattom near Mavelikara. The ruler of Odanad as a signatory in the Kottayam Copper Plates of Vira Raghava Chakravarthi. The Unninilisandesam (1350-65) refers a ruler of Odanad by name Iravi Varma. In 15th centaury, the capital of Odanad was shifted to Eruva in Kayamkulam. Onattukara was a very famous for its abundance of agriculture important. Along with farming, fine arts, culture and literature formed and developed. It is believed that Onattukara's rites were protected by Bhagavathy temples, which were large numbers. Among them most famous temple is Chettikulaganra Bhagavathy Temple. This temple is the charm of Onattukara (Odanad).

As per the details available through history, Kerala was the creation of Parasurama. He built lot of temples all over Kerala. For protection and progress these temples, he installed five sub-temples. Among them the most important one is Chettikulangara Temple. The festival of Chettikulangara is worthy to be equal to Vaikkathshtami, Guruvayoor Ekadeshi and Shabarimala Mkarasamkramam.

Kuthiyottam is an ideal of the culture and artistic awareness of the gone period. Among the famous temples in Kerala, Chettikulagara temple in Onattukara is in front line. There is no mistake in calling this temple as the "Kailasam" of devotees. Goddess of Chettikulagara blessed the people of this area to work hard and to lead prosperous life. In the sheltering hands if this Goddess, devotees are finding salvation.

Religious colourning is seen in almost all the folk songs and dance forms in India. Even in those performed in connection with harvest, sowing of seeds, festivals etc. Many of these arts forms are performed by men alone and some exclusively by women. Most of the folk arts are performed to the accompaniment of songs which are sung by the dancers themselves or occasionally by a group of musicians. Kuthiyottam is the special feature of this temple. It is performed with praising the glory of Bhadrakali who destroyed Dharikan. Chettikulangara Kuthoyottam is still continuing in its original form in structure and nature, without changing into an antique collection, breaking in course of time and social evolution.

Kuthoyottam and other festivals are a compilation of Hindu-Buddhist religious belief and artistic awareness. This is a harvest festival. From ancient time onwards harvest is a period of festival for all communities in Kerala. This is very much true in the case of Onattukara which is important for agriculture.

Kuthoyottam was explained as a religious function performed in the form of dance envisaging as a human sacrifice. Separate sings are written for Kuthiyottam known as "Kuthoyottam songs". These songs are a separate branch of Malayalayam folk songs. Expression of the arts is the importance of Kuthiyottam. Self sacrifice is the main part of Kuthiyittam. That means 'which is mostly liked to be offered to Goddess'. If we witness the Chettikulagara Kuthiyottam, it will be an unforgettable experience. Professional dancers, dance movements, singers, songs give an atmosphere of liveliness. Kuthiyottam songs will mesmerize the audience and dance performance surprises the onlookers. Whatever may be there is no doubt that Kuthiyottam in Chettikulagara is based on religious rites. At the same time with calculation of tunes, rhythms and steps it is considered as a scientific art form. The thirteen divisions (Kara) in Chettikaulagara are performing this ancestral art form in its complete purity.

Devotion with humbleness is important while conducting Kuthiyottam. These factors are reflected in Chettikaualagara Kuthiyottam. So it is not wrong to say that the beginning of Kuthiyottam was started from this soil. Through this study, it reveals the fact that, Chettikulagara is a place of 'unity in diversity' and its favourate ritualistic and aesthetic art form Kuthiyottam proved this unity. When we have a close study, it is clear that Chettikulagara temple, its favouite art form Kuthiyottam and the surroundings of the temple are an endless creation of God.