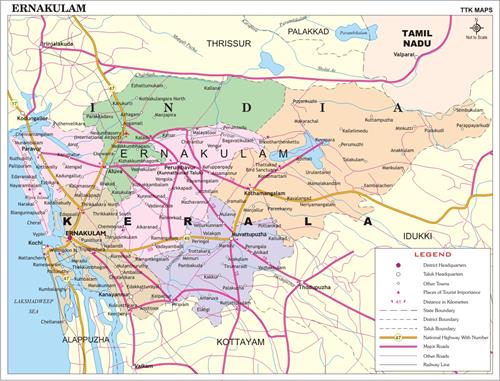 Ernakulam, the commercial capital of Kerala is a beautiful coastal city located close to the Arabian Sea. Ernakulam got its name from a very famous temple called the Ernakulathappan Temple which worships 'Lord Shiva'. Its population is 3,279,860 with 1,617,602 males and 1,662,258 females. It covers around 2408 sq.km of area with 251cm of rainfall and has an altitude of sea level having 35%, 22.5%, 32.5%, and 20% of temperature. Malayalam and English are the common languages used. Ernakulam is India's first fully literate district and got this record in 1990. It is located near Thrissur in the North, Alappuzha and Kottayam to its South and Idukki also in its Eastern part. Usually boat services between Vypeen, Alleppey, Fort Cochin, Changanashery, Quilon, Kottayam, Willingdon Island, Varappuzha, Mattancherry, Crangannore, etc. are all in for the run.

The most conducted tours are in Thekkady for running special buses to Wildlife Sanctuary for the tourists, Boat Cruise with sightseeing, Velamkanni, Coimbatore, trips between Cochin and Lakshadweep in large ships, Madurai, Munnar etc. It has 50% of flat land, 20% of mountains and 30% of water bodies. Periyar, moovattupuzha, Thodupuzha, are all major rivers and Vembanad, Kodungaloor and Varappuzha are some of the lakes. 465 sq.km of the district is covered with forest. Domestic and International Airports are situated in Cochin. Many foreigners used to visit here in order to export and import all sorts of valuable products like sandalwood, spices etc. as these are very rarely available for them. Even now, the most attractive and panoramic place for tourism in Kerala is Ernakulam and still keeps on going. Ernakulam has now become economically and financially highly developed city of Kerala. 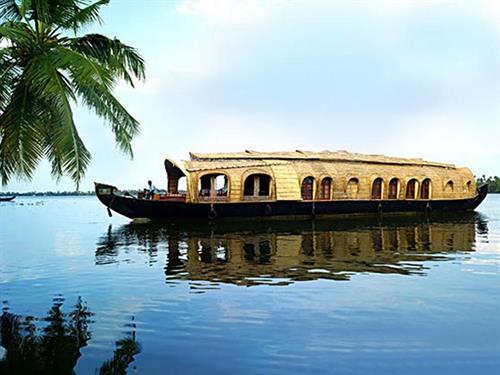 It is predicted that there were settlements in Ernakulam from Stone Age onwards. Carved caves, Dolmens etc. were all the monuments seen in major areas of the district. During the ancient and medieval period, Ernakulam was the Goldspot for revenue and taxes through tourism. In 1st-April-1958, Kanayannoor, Kochi, Kunnathunad, Aaluva, Paravoor, all these places which were first a part of Thrissur district started splitting to form Ernakulam district. When Idukki district was formed in 26th-January-1972, Thodupuzha was joined with it. Also Muvattupuzha got split and formed Kothamangalam. 'Chera Dynasty' had the complete power over most of the parts of Tamil Nadu and Kerala.

Due to the rapid increase in the developments and facilities, its population rose at a sudden rate. It was only 21,901 in 1911 which was the first censes done for the state. The establishment of 'Info Park' in Cochin has entirely changed the traditional phase of Ernakulam district. Cochin which is called 'The Queen of Arabian Sea' and 'The Venice of East' comprises of Ernakulam, Fort Cochin, Mattanchery, Willingdon Island and a cluster of Islands which has worldly popularity for the beautiful scenes, monuments, sanctuaries, museums etc.

'The Hill Palace' situated 13km from the city at Trippunithara is the largest archaeological museum in Kerala which was built in 1865. It displays great properties and wealth of the Royal Family of Cochin which includes the majestic bed, rare paintings, Throne and Crowns of the Kings, carvings and other samples. Its landscaping covers 52 acres of lands with fountains, ponds, garden, lawns etc. and has a total of 49 building which are made traditionally only for Kerala. 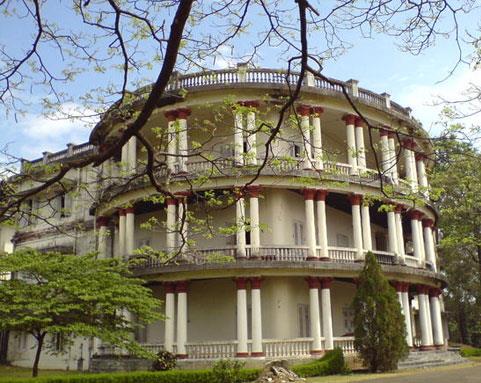 Cochin Shipyard is one of the largest public sectors which build and maintain large ships thus Indian Navy even by providing air crafts for guarding the country. In 1972, Cochin Shipyard got approved as 'the Government of India Company'. Training for Marine engineering is also given to all students (100 students per year) in the Shipyard. M.V. Rani. Padmini was the ship that sailed first in 1981. Ship repairing was started here in 1982 including the ships of large oil industries. The O.N.G.C has presently given orders to this Shipyard and is developing steadily.


The Cochin Harbour and Port – Trust was a dream project of a British Engineer, Sir Robert Bristo. It is one of the largest ports which earn the maximum foreign exchange earnings in India lying on Willingdon and Vallarpadam Islands which opens into the Arabiab Sea. It was established in 1926 and has completed 86 successful years in total.


This Church was built in 1510 AD by the Portughese in Spanish architecture and is the oldest church in India. It is the first Church built by Europeans in India. In 1524, Vascodegama was buried in this place and vistors can still see his tomb here. But when it became an Anglican Church, it changed its authority to Dutch and the British.


Alwaye which is located on the banks of Periyar River almost 23km from Ernakulam is an Industial town which has Premier Tyre, Hindustan Insectcides, FACT, Chakola Saw Mills, Aluminium Company and many other small industries like Eloor, Kalamassery, etc. which are located between Alwaye and Ernakulam. The YMCA camp site which spreads over 1 acres of land is the perfect place for conferences, picnics, retreats and all. 'Annual Sivaratri Festival' is one of its famous attractions.

Rather than these there are lots of places for the tourists like Naval Base, Santacruz Cathedral Church – Fort Cochin, St. George Church – Edappally, Crangannore, Dutch Palace – Mattancherry, Kathakali Centres, Jewish Synagouge, and lots more. The visitors will not go back when they comes to know about these beautiful scenes.