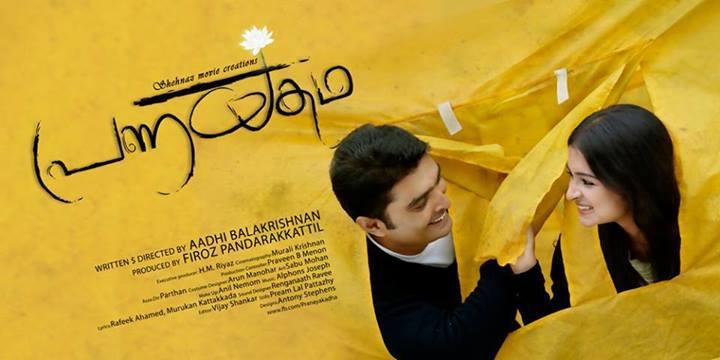 Yet another romantic thriller is gearing up to entertain the malayalam movie lovers. Titled 'Pranayakadha', the movie will be directed by debutante Aadhi Balakrishnan who would wish to create a space in the malayalam film industry.

Even though a number of movies creamed with romance had reached theatres, through 'Pranayakadha', Aadhi tries to tell a thriller set against the backdrop of teen romance. Set at the backdrops of exotic locations including Munnar and Vagamon, this movie will be a visual treat for the movie lovers.

'Pranayakadha' pools into the life of Anand (Arun Narayanan) and Reetha (Swarna Thomas). Anand, a college goer and Reetha a plus-two student falls in love and wish to get married.

As Reetha was only 17 years old, blind love makes the pair to run away. Anand's best friend Seban (Govindankutty) too joins them in the adventure. Anand and Reetha hoped to tie the knot after a few days when Reetha turns 18.

Having an interesting tagline 'Paranju paranju kadu kayari', the movie reveals some interesting incidents which are followed later which takes the story to the next phase. Even though it cannot be tagged as a road movie, the story zooms into the affair of the lovers and their journey.

Scripted by Aadhi himself, 'Pranayakadha' celebrates friendship and togetherness. Coupled with a strong social message, the movie will keep the audience engaged from humour to suspense and music.

Featuring some beautiful songs sung by Shreya Ghoshal and Alphonse, the music will give a real time experience for audience. For the lyrics of Rafeeq Ahamed and Murugan Kattakkada, the music is set by Alphonse Joseph. A song filmed against the backdrop of an arrack distilling centre using natural sounds of the forest is mixed with vocals.

Joy Mathew, Dinesh, Urmila Unni, Balachandran Chullikkad and Lishoy would give life to other prominent characters in the movie. Murali Krishnan has cranked the camera and had given his best capturing the visual beauty of the nature. The movie produced by Firoz Pandarakkattil will reach theatres soon.
.

Preview of Malayalam movie Mallu Singh. Mallu Singh is a Malayalam comedy movie starring Prithvi Raj and directed by Vysakh. Prithvi Raj plays Harry Singh a malayalee disguised as Sardarjee. Rima Kallingal is the heroine of the movie. The movie is the first out and out comedy of Prithvi Raj.

Actress Shalini profile & biography is given here. Shalini also known as Baby Shalini is a famous actress who proved her talents in Malayalam & Tamil films. She was born on 20 November 1980. From the young age itself, she started acting in films. Her parents are Sharaf Babu & Alice. Baby Shalini is married to Ajith Kumar, the famous actor in Tamil. This article also contain the facebook page of Shalini. Visit this article to know more about Baby Shalini & her hit films.