The most anticipated movie of supersar Mohanlal in the recent time, Gitanjali's shootig is going rapidly in and around Thiruvananthapuram. It is the dream come true for Mohanlal and Priyadarshan to bring back Dr. Sunny to silver screens. Touted as a psychological thriller, Geethanjali is packed with suspense and humours. It is Priyadarshan who is calling the shots of the movie. Mohanlal will appear as Dr. Sunny- the character he had done wonderfully in Manichithrathazhu. Keerthy Suresh is the heroine of the movie. Shobhana will be doing a cameo role in the movie.

Cast and Crew of Geethanjali 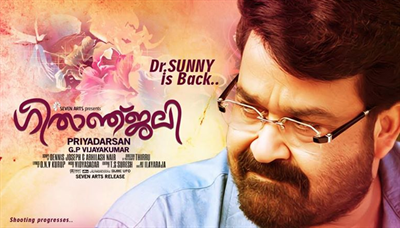 The Heroine- Keerthy Suresh
A new actress is stepping into Malayalam film world through Geethanjali. The heroine of Gitanjali is none other than Keerthy Suresh, the daughter of yest year actress Menaka Suresh and producer Suresh. A golden opportunity has come for the newcomer. What do an actress to dream about her debut in Malayalam than a Priyadarshan-Mohanalal movie?. Keerthy Suresh is doing the role of a psychology patient in the movie. Nishan is paired against her.

Geethanjali will be the first release of Mohanlal after a wide gap of more than 6 months. The shooting of the movie is going quickly. The team is planning to release the movie during as a Christmas grand release.

Preview of Malayalam movie Mallu Singh. Mallu Singh is a Malayalam comedy movie starring Prithvi Raj and directed by Vysakh. Prithvi Raj plays Harry Singh a malayalee disguised as Sardarjee. Rima Kallingal is the heroine of the movie. The movie is the first out and out comedy of Prithvi Raj.

Actress Shalini profile & biography is given here. Shalini also known as Baby Shalini is a famous actress who proved her talents in Malayalam & Tamil films. She was born on 20 November 1980. From the young age itself, she started acting in films. Her parents are Sharaf Babu & Alice. Baby Shalini is married to Ajith Kumar, the famous actor in Tamil. This article also contain the facebook page of Shalini. Visit this article to know more about Baby Shalini & her hit films.