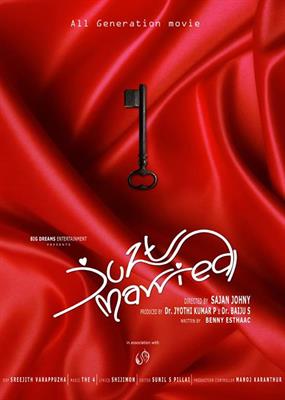 With ample opportunities available to perform in front and behind the camera, more youngsters are gearing up to take the merit of the time. 'Juzt Married' helmed by debutant Sajan Johny is yet another project which started rolling a couple of days ago. With Sreeram Ramachandran in lead, this movie will be blessed with the presence of Neeraj Madhav, Devan, Kalinga Sasi, Beena Balakrishnan, Moli and Sethu Lekshmi in important roles.

'Juzt Married' is being produced by Dr. Jyothikumar P, Dr.Baiju S under the banner of Big Dreams Entertainment and in association with Digital Carving. The camera is held by Sreejith Varapuzha. For the lyrics of Shijimon, the music is set by The 4. Johny Esthaac has written the story of this movie which is touted as romantic comedy.

Sreeram Ramachandran who plays the lead role in 'Juzt Married' is much familiar among the movie lovers. The young man who worked behind the screen as an assistant art director for movies like 'Ghajini' and 'Jilla' made his screen presence with Vineeth Sreenivasan's Malarvadi Arts Club.

The actor was later seen in 'Thattathin Marayathu' and Shyamaprasad's 'Artist'. Sreeram is keeping his charisma alive through the sitcom Chumma which is being telecast on Amrita TV.

Being a movie made for 'all generations', 'Juzt Married' has created a huge buzz with its interesting posters. The first look posters released through social media sites have already got huge response from the movie enthusiasts.

So let us hope that, Sajan Johny who is much aware about the interest of the movie lovers would deliver something special which will have the signature touch of the director.

Adding more to it a long line of movies are under production with plans to release in 2014.